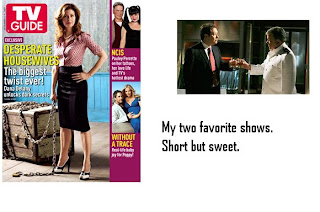 Like many of you, I've been watching way too much TV this week. It's the end of a very short season.

So to make up for it, I thought a little extracurricular cleaning might help. Having emptied the refrigerator this morning, I yanked the blue plastic trash basket from under the sink. You have to toss the science experiments. Underneath the pipes I saw a little rust and definitely, crud.

The kitchen was already in disarray. It couldn't hurt to attack the cabinet, too.

It's not rocket science, understand, so your mind drifts off. Mine drifted to the two shows I watch religiously, Desperate Housewives and Boston Legal.

Last week's cringe on Desperate upset me so much that I almost swore off the show forever. A little girl emotionally blackmails step-mom Lynette Scavo (Felicity Huffman). Lynette, always the sympathetic character, will go to jail for child abuse in the closer because of this manipulative, unlikeable kid (Rachel G. Fox is perfect) .

She really creeped me out, even though her character and the story line didn't ring true. So I didn't want more, but I said to myself, You're tougher than this. Watch the finale.

The truth is that television is kind of new to me. I watched it as a young person, as a little kid, then checked out. We had shows like Leave It to Beaver, Andy Griffith, Lassie, Mr. Ed, and Father Knows Best, shows that reflected the hopeful mores of the time. Plots didn't vary much. A kid gets into trouble, the parents (or animals) help resolve it, and everyone whistles at the end.

When I checked in again, television was mostly people taking off their clothes or shooting at one another, and nobody rode a horse or loved a dog. So what was the point?

A couple of years ago a patient, an adolescent, talked about Gilmore Girls. She really wanted her mom to watch it so her mom could become more like Lorelai. Empath Daught also liked Gilmore so I checked it out and found the relationship between mother and daughter interesting. Rory could see right through Lorelai's issues, and there were many.

So if I watched the show I could say to the kid (or to my daughter), "Did you see last night's Gilmore?" and we could talk about it.

And I loved the stuff with Rory's grandparents. Lorelai had cut them off because they didn't accept her as different, or so she always thought. Lorelai stayed angry at Richard and Emily, so that conflict kept my attention; that and counting everyone's drinks. (Edward Herrmann and Kelly Bishop are totally watchable and wonderful actors, which certainly helped).

So yeah, I got hooked. It was the entry drug.

And sure, I broke down and watched the two-hour season finale of Desperate on Sunday night. I set the VCR so that if I couldn't stand the cringe I could tape the show and watch it another time, fast forward through the stuff that upset my equilibrium. But the show was pretty good, the ending a real winner.

The enactment of spousal abuse, the whole Katherine sequence (Dana Delaney, so good) is amazing. You can watch this at ABC.com whenever you want.

And last night, well, my mother reminded me that Boston Legal would be on, so hey, who am I to lose the recreational intimacy of discussing that with Mom?

So there I am, cleaning under the sink, and I realize that both shows ended (stop right here if you don't want to read the spoilers) with messages about friendship.

Look here! the networks are telling us. You people are getting better. You want friendship in your lives. Sex and violence? Sure, we can provide that, too. But what you really want is friendship and we know it. So we'll give it to you. You get it here. We'll give you friends. Live vicariously.

What we want are friends.

Alan Shore (James Spader) is in a huge disagreement with his best friend, Denny Crane (William Shatner) and they're about to go head to head in the courtroom on opposite sides of a case. Alan, in the hallway, overhears their mutual partner, Shirley Schmidt (Candice Bergen, my hero) tell Denny that Alan is very competitive. He's so competitive when it comes to his work, and this case is work, make no mistake about it, that he will take no prisoners. He will crush even his best friend to win.

After the commercials Jerry Espensen (Christian Clemenson, brilliant as the lawyer with Asperger's) argues with Alan about something immaterial. Alan has always been Jerry's arch support. But lately, they've drifted apart.

Jerry makes light of it. You can tell he's very nervous but he tries to play it cool and says, "Work! It's work! I have so much work, and you have so much work. We're both busy working and that's just the way it is. Back to work."

Alan doesn't move. He thinks awhile, then says, "I never thought of myself as a person who put work before friendship. But it seems I do."

Jerry looks up. He gently replies, "Friendships are like little gardens. We plan to tend to them but always seem to put them off until next week."

Pretty good writing for television, no?

Alan and Denny make up, too, at the end of the show, and leave their scotch on the balcony to go fishing, perhaps camping, who knows? They can do what they want. They can work on their friendship if they want. It is their choice. The two of them walk arm in arm in the streets of Boston in the middle of the night in their Coast Guard jackets and those silly plastic or rubber pants you wear when you're about to walk into a river to fish.

It is a great scene. The type of scene that makes us wistful for that sort of freedom.

That, only days following the Desperate closer. The Desperate epilogue takes place five years later, following the drama, and the wives are seen playing cards, Gabby (Eva Longoria, such a star) has gained a lot of weight and has two little plump daughters, maybe two and five. Susan (Teri Hatcher) is married to a hunk we've never seen before (I haven't). Lynette's children are older, more difficult. Bree is back with Orson. And Katherine is among them. She's one of them now.

We know that the writers will start next season with these themes, children who are out of control, sex, family tension and desperation. We also know, that they know, that we're glad these housewives have each other.

So there I am, under the sink, going over this stuff. I finish up the scrubbing and get to cleaning up the mess I've made emptying the fridge. I toss an almost empty Dannon yogurt (vanilla, if you must know) into the trash then fish it out. I've used the yogurt as a starter and made my own, surely more fattening and worse for you, but better.

Rather than throw out the container, I'm thinking that I should wash it out and use it for my yogurt. Then, when I see it in the fridge, I'll know it's yogurt, not mystery food.

Somehow (so me), while washing it out, that foil at the top slices my left index finger.

No panic, no pain, I move to the bathroom. The blood drips into the sink (you're reading popular media so you don't mind a little blood, right?) and with my good hand I get out the BandAids. It's getting a little difficult. The paper on the first BandAid sticks to the adhesive and the second BandAid gets wet. Things aren't going so well.

In my head I'm wondering, sheez, do I need a stitch? I begin to really regret this stupid idea, using a Dannon yogurt container when I have a houseful, no joke, a house full of Tupperware.

Then somehow, I remember Lillian.

It's her fault I made yogurt.

When I was in college as an undergrad, Lillian taught me two things. She taught me to make bread, and she taught me how to make yogurt. These are invaluable skills and may have exceeded in utility far beyond whatever I learned in the classroom.

We lived in a university student co-op (all women) and I was the R.A. She was one of the only really mature kid in the house, although I loved them all the same. Lillian, from a tiny farm town in Illinois taught me how to make bread the old fashioned way, no dough hook. I use one now and bet she does, too.

So here I am, thinking about Lillian probably for the first time in many, many years, wondering where she is, what she's up to, wondering if she's married, has children, maybe grandchildren. For all I know, she's no longer alive.

I let her go. I just let the friendship go after school let out. No idea where she is now. I think I remember her last name, but there must be a thousand women with that name (last name starts with an L, maybe you know her).

So I ask myself, and you probably do, too, How do we let this happen? Don't we know as much as the television producers when it comes to the importance of people?

You have to wonder.

shrink on the couch said…
I seldom watch Boston Legal but happened to catch the show you mentioned, and I was also touched by the quote , "Friendships are like little gardens. We plan to tend to them but always seem to put them off until next week."

I had been debating whether or not to attend a lifelong friend's out of state wedding. The above quote moved me enough to make a decision - yes, I'm going. I called her this afternoon. She was so delighted. And now I am too.
May 22, 2008 at 10:49 PM

Anonymous said…
First, I love tv. Love it. When my brain can stop working so hard. Second, I was just thinking about friends lately. I am on facebook and am looking on there thinking "who the heck are these people?" And realize some I was incredibly close with many years ago. Two of them (a couple) were in my wedding. They rarely reply if I send them an email. It makes me sad to think the people who are important in my life, my current friends, may change, move away or our relationships may change at some point for different reasons.
May 23, 2008 at 6:15 AM

Anonymous said…
Yep. Grew up on the same shows. And then stopped watching for years also. Haven't seen either of these shows yet. (I'm more of an HGTV kind of viewer.)

The friends thing is interesting. I'm in the middle of finding it hard to maintain a long-term (decades-long) friendship because our interests and needs have shifted so much over the years. Often feels that our friendship is really more of a friendship of memories and habit rather than present-time compatibility...

On the other hand, I've also recently had the great fun of reconnecting with an old high school buddy whom I'm finding as interesting as I did back then.
May 23, 2008 at 9:16 AM