Who Are You Calling A Mama's Boy

Tried and true template for making a male child into a mama's boy:  An emotionally intimate relationship between a mother and her son to the degree that the son shares his thoughts and feeling with his mother, probably because he trusts and respects her. But other people think he's a sissy.

Who could trust and respect a woman, right?

The same recipe, the one that formerly described the makings of a mama's boy, now predicts a young man's self-assuredness, independence, and masculinity.  Establishing intimacy in the home is the way to teach children how to be happy, stable individuals, strong enough to be independent, mature enough to know how to be masculine when need be, soft when occasion calls for it. And we mothers do this best.

Not that fathers can't, but group findings indicate women are more empathetic.

The mother-son relationship is one variable, certainly, that predicts all of these good things. But what about confounding variables? Perhaps they are discussed in a new book, about to be released in March.  Somehow I doubt it, though.

The book is called "The Mama's Boy Myth," hopefully the results of dissertation research.  I read an excerpt sipping my morning coffee Saturday.  Kate Stone Lombardi cites a few studies to support her thesis that an emotionally intimate mother-son relationship fosters a young man's emotional maturity and positive relationships, while not undermining his masculinity:


(Sourced, Child Development) A study. . .6,000 children, age 12 and younger, found that boys who were insecurely attached to their mothers acted more aggressive and hostile later in childhood—kicking and hitting others, yelling, disobeying adults and being generally destructive.

(Not sourced, but variables in the last sentences lend credibility) A study of more than 400 middle school boys revealed that sons who were close to their mothers were less likely to define masculinity as being physically tough, stoic and self-reliant. They not only remained more emotionally open, forming stronger friendships, but they also were less depressed and anxious than their more macho classmates. And they were getting better grades.

(No source, but a relationships cited are reliable, meaning repeat in other research) There is evidence that a strong mother-son bond prevents delinquency in adolescence. And though it has been long established that teenagers who have good communication with their parents are more likely to resist negative peer pressure, new research shows that it is a boy's mother who is the most influential when it comes to risky behavior, not only with alcohol and drugs but also in preventing both early and unprotected sex.

(Arguably, there are studies considered to be reputable and scientific in the Ex-gay, Project Exodus community, but the motives of researchers are suspect). Finally, there are no reputable scientific studies suggesting that a boy's sexual orientation can be altered by his mother, no matter how much she loves him.

Why bring it up?  It's obvious Ms. Stone Lombardi is on to something.
Because so much is missing.

The confounding variables include but not are limited to: fathers, grandmothers, grandfathers, uncles, aunts, cousins, teachers, siblings, mental illness, and personality disorders in the family-- they all influence a child development, as do multiple combinations of relationships and genetics.

Ms. Stone Lombardi probably focused upon only one variable, or so it seems, the mother-son dyad. That's great, but it doesn't tell the whole story, not by a long shot.

Let's repeat what family therapists see, and what we want to see in families, just in case, the family therapy spin on family alliances.

Ideally, father-mother (or mother-mother, father-father, in the case of sexual minority parents) have the closest relationship in the family.  Each of them is emotionally intimate with each child, too.  But if theirs is the strongest bond, we think that sibling relationships are more likely to be intimate, too. 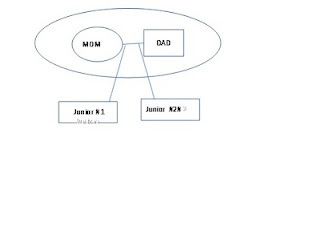 See how the parents get their own little cocoon? Nobody's threatening the integrity of their relationship. And in the picture below, see how the kids get to plot and plan against them? 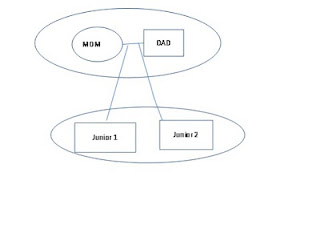 This is nothing new to family therapists, nor to those who lived in families like these, healthy ones. It isn't new to those who find themselves working on healthy boundaries in therapy, either.

It is when the alliances get messy that we worry. Take Junior #2 out of the picture for a moment. Perhaps he's off at boarding school.  Junior #1 and Mom have such an amazing relationship that Dad can't break in.  He feels he's on the outside of what is really the most intimate relationship in the family.

Now we have what we call a perverted triangle. Dad is a child, in a way, crying to break in. He's in the generation below his spouse and his son, poor guy.   That's not where he's supposed to be according to Sal Minuchin, a father of family therapy.  This is considered Structural Family Therapy, when we structure the family in a way that stacks the deck in a good way for the kids as children, and for the parents, for their future as a couple. 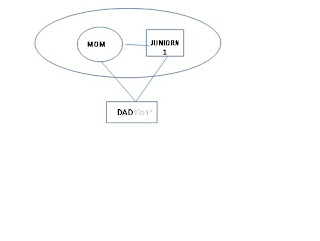 A picture tells a thousand words, no?

And yet. Establishing that intimate relationship between the parents can be exceedingly difficult, and is made even more difficult when addictions, mental illness, personality disorders, and the ordinary stress of living makes life difficult. And therapy, for some, seems inaccessible, expensive and time consuming.

So yes, moms. Do what you can to stay close to the boys.

Just try not to leave Daddy out.

I actually enjoyed reading through this posting.Many thanks.

I agree. I believe Dad belongs in the circle.

As a strong father advocate, I have to say that it's shameful to me that society expects mostly the mothers to be the nurturers. Father, I believe, have just as much responsibility to be nurturing, bonding caring, etc with their children and especially with their boys so as to model appropriate manliness. Too bad these kinds of boys (and dads) are called the sissies.

I wish that in my teen years, my dad had been closer to me and talked about feelings. I got a lot of that from my mother. She didn't edge out my father, because he removed himself. I am glad though that I had at least one parent who could express feelings both verbally and physically. I felt loved.

Great post. I do have a question. What happens when the mother doesn't let go of the intimacy with her son (at the appropriate age), even though he has clearly expressed his desire to "cut the cord" and to develop a new intimate relationship with the woman he wants to marry?

It seemed to me that the mother thought it was OK for her son to have two women in his life and have intimate relationships with both, his mother and wife - scary.

Just picking your brain on this subject, I'm not a mother yet, nor do I have a son so naturally I'm bias. My now husband and I have had some real difficulties dealing with his mom's need for his attention and not focusing on the intimate relationship she should have with her husband.

Again, great blog! So glad I came across it today.

No, we moms have to step out when the time is right, hand over the mantle to a younger, lovelier woman. Then it is our task to establish a respectful, hopefully loving relationship with her, the son's replacement. It's emotional, it is hard, but stepping back is the only way to ensure their relationship starts off and continues to be primary.