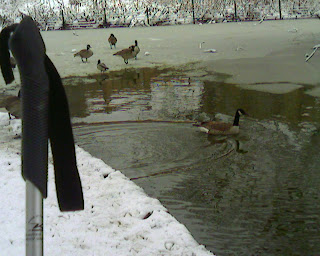 My daughter says that it's 86 degrees in L.A.

Here it's in the thirties, best forties. We're supposed to get into the fifties by mid-week.

I bought skis, as you know, in late February thinking, well, if I buy skis then for sure it won't snow anymore. We've had 55 inches in Chicago this winter, more or less. I had to do something.

And it worked for awhile. No snow. Really, it started to look pretty good outside and we had some relatively warm days. I had skied once and then the snow stopped, as if on command, and melted.

Then Friday we had that fresh six inches you see in the picture. What you see could easily have been a picture of a pregnant robin struggling with groceries in the snow, had FD not rushed me. "Come children," he called from the tennis court, "It's time to come in and get cleaned up." (I was the only one in the park).

He had dropped me off at there to mess around with my new skis for the second time, while he made rounds at the hospital. The only creatures braving the weather that late, very snowy Friday afternoon, which happened to be the holiday of Purim (when things have to be upside down, note the significance later on) were me, a squirrel, a dog, and the ducks. Later the pregnant robin showed up.

This park has a zoo, so I was hoping for a few more mammals, but apparently the zoo people keep the animals inside, or maybe they go to a warmer zoo for the winter. I don't know. But Indian Boundary Park in Chicago is known as the local zoo park with the llamas that spit.

I've only done this once, this cross-country ski thing, so at the outset am pretty sure I'll fall and hopefully will fall well. It's something some of us learn to do as kids, assuming we're allowed to play. The lesson is, Try not to fall, but don't worry much about it, and if you do fall, fall well.

Kids, you probably know, are closer to the ground.

Anyway, I knew I had to make a trail. When you walk in skis on fresh snow, you have to be careful. The skis sink and it's hard to keep your balance. So you have to make a trail, basically, by walking* carefully through the park and then returning on the same path to reinforce it. There's probably a technical term for forging ski trails, but I never had a lesson, so am at a loss.

It was a great time for all, and flew by quickly. I got a little nervous when the dog appeared out of nowhere and glared at me. I wondered if I'd have to use my poles under attack. He wasn't smiling. You know how dogs smile. Instinctively (what else does one do when confronted by animals) I turn around facing another part of the park, hoping the dog will agree that the park is big enough, that there is enough territory for everybody.

He agrees, doesn't follow me. I make my way over to the duck pond, and it's amazingly beautiful, the picture above does not do it justice, and in full awe, I fall. A little hard. This happens because I just have to take a picture, juggling mittens, poles, and a camera phone in a case. What is it with us that we can't be content to see something beautiful, we just have to capture it? It's a sickness, I tell you.

So I'm fiddling with my camera phone and take the fall and the phone lands in the snow but I quickly dig it out, fairly sure that the dry snow hasn't hurt the phone and it hasn't.

Groaning from the fall (shoulder), I slowly pull myself up and carefully check my balance, resume the snapshots. Fairly well-padded, the injury must not be anything that a little ice (a lot) and three Advil won't take care of with a bit of rehab.

Ignoring the set-back I leave the ducks and set out to play for as long as possible on the new trails. FD picks me up at the tennis court and says, "The kids want to Skype and show us their Purim costumes and gloat over the 86 degree weather."

Safely tucked in front of the computer I tell my grandson that we have SO MUCH SNOW that there are snowmen everywhere.

He's three, so this is very exciting news. "Are they real?" he asks, wide-eyed (you can see those eyes with the web-cam, it's very wonderful).

"What do they look like, these snowmen?" he continues. "Do they walk?"

He's seeing legs, I'm pretty sure, being from California, a snowman-less state.

"Nah," I say, bursting the bubble. "They're not real. They're just fake people made out of snow."

The look of disappointment, unforgettable.

Great post, really.
Our snow is just for snow, not skiing.

Oh, Mother. Such a concept.

I miss cross-country skiing. I think "global warming" is really just regional, and the region it's hitting is Central New Jersey. Only a smidgeon of snow this year.

I'm giving you a lesson in my head as I read your post. Slide right leg, slide left leg, repeat a few times, coast, repeat.

If you want, meet me at Bretton Woods, White Mountains, New Hampshire, and we can all have a great time.

Aw, Leo, I think I've had enough for this season. But I'll remember the lesson, thanks!

Aw, Leo, I think I've had enough for this season. But I'll remember the lesson, thanks!

Last night he woke me up at 1:30 AM and when I got to his room and asked him what was up he said "Mommy? Are we rich?"

Oh, honey. Let his grandmuhver tell him, okay, the definition of rich. (as in, helfy). You were too tired at the time, I know, but such an opportunity for me.

Your daughter is right. The weather has been beautiful.

I live in snowy Rochester, N.Y. I have not put my shovel away yet. You never know here. It's a nice place to live, but the winters can be a bummer.

Yeah, forces us to use some imagination.

What's Going to Be with Our Kids?