But there's an original thought on the subject. I think it's mine, okay, but the way I'll teach it is inspired by Indexed. If it's somewhere in her blog, please forgive me Jessica and someone scream at me and I'll take this down immediately. I haven't read very much over there. She's a new find. I'll ingest it all in time.

Let's say it's a woman who has broken up with a man. She knows he's not good for her. Say they're married a few years and the part that isn't good is ascendant and will clearly continue to ascend.

He says, "Suit yourself." He takes it like a man. He IS a man and she LOVES this man. She loves very much of this man. She just can't take certain really difficult traits, problems, drama. And they're not going to get any better.

He cooperates with her. They file for divorce. He lets her idle awhile. She's learning to live alone. Her family and friends are supporting her. Even her work is more exciting lately. She comes to see me and she's thinking, This will be okay.

But he knows her so well. He starts with an occasional text message, then the phone calls when he knows she'll answer, and finally, the big, plaintive, I'm not WITH anyone. You're in my heart. I love you. I've always loved you.

But he doesn't say, Take me back. Don't let me go. She takes it, correctly, that he's not going to make this divorce emotionally easy. If he hurts, she should, too.

Remember, SHE can be a HE, or they can both be HEs, both be SHEs.

But assuming our patient is female then it's a problem for her that he, because we're making him a he, didn't work for her. He didn't extend himself very much to keep her. She's bothered by that.

But really? She's more bothered that there's a part of her that can't simply let him go. She says it defeatedly. As if the job of letting him go is the goal.

I say, "Well, you can't let ALL of him go. Why would you want to throw all of it away. You get to keep the good. You should always think about, remember, hold onto all of the good. . .forever. Didn't you earn the feel-good?"

Then because she's a math person and because I've thought in set theory since 6th grade, I add the following picture. 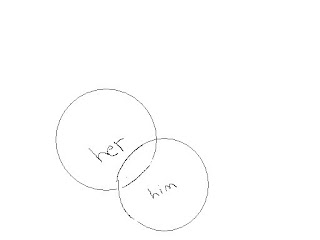 Is that so terrible, I ask, to hold onto that little football, the piece inside of you that represents him? You aren't him. He isn't you. You're very different, complicated people, who share an approximate 8% intersection at best. Can't you just own that? To myself I'm thinking, there's not much choice, in any case. Too many snapshots. Too many body memories.

But is it therapeutically necessary to make oneself lose the other, perhaps it is for sake of the next relationship?

I think not. Absolutely not. She, certainly, will continue to grow. Her circle of self will get bigger and bigger. And that slice of him that she cherishes will seem smaller and smaller over time.

She won't forget the good or the bad very soon, anyhow. Why not focus on the good? It's not quicksand, not really. A person might initially get caught into remorse, the seller's remorse. But it's pretty easy to remember all those reasons for leaving. Try forgetting those. Good luck.

I've thought in set theory and Venn diagrams since 6th grade, too, Linda -- so this post made great sense to me, and I loved the graphic.

Thanks Shaula. I did have to drop out of art school, you know.

Great post, Linda. I feel like I should send you mountains of money because of everything I've learned on this site (but then I remember my molehills of money are sending my daughter to a private college.) Anyway, thanks for the great advice.

Oh, by the way. I think you're putting on us about the whole art school aspiration...just a hunch. ;)

G- When I was an undergrad I had no idea what I liked so I took more courses than anyone I knew. The art classes were so interesting and I really did like them, so I took enough of them to make art a major. A drawing teacher took me aside and said, "You're not going into this, right?"

Mountains of money don't go very far, so let's just keep having fun with this. Thanks for reading.

Wow interesting I love your perspectives.

One thing I hope people get from this blog is that even though they teach something to you in school, even if it's research-based, empirically validated, etc., you always have the big picture (or should get it) and can see even more variables than the researchers included in their studies. Therefore doing treatment by deduction (rotely following rules learned in class) won't cut it and can even get you into trouble. It's a good start, no doubt, to go with the rules, and I actually do, by the way. But a therapist also has to see into a person, empathize, and then apply--it's never the other way around.

You asked for 'em:

2. What politician would you most like to be locked in a room with for one hour?

3. What was your best halloween costume?

4. If you could be a man for a week, what would you want to experience?

5. What moment scared you the most?

Okay, Amy, I'll get right on it. But I can't let anything burn in the kitchen, so this'll be up, probably on Saturday night.

If anyone has NO idea what we're talking about, the meme thing is on Amy's blog. Shoot on over there.

Or click on her picture and go from her bio to her webpage.

I said yes to this at a weak moment. Those are generally on Thursday nights as I ease into cooking a bit for Shabbas after a long work week -- my way--on the phone, music LOUD, no one home, laptop on the table, :)

I was in the middle of that song from Miss Saigon, I Believe,. Ah.

Okay, I'm rethinking the Halloween question. I want to replae it with... What was the best vacation ever? Where did you go?

Haha, Doc, I have a funny Miss Saigon story I'll have to tell you sometime.

Hey, Linda. About your college art experience. I totally understand. So does Twyla Tharp apparently who said, "Art is running away without leaving home." Isn't that brilliant? If you want to "run away" for a half hour, you should do Frank Sirianni's graffiti-my-blog. You literally do a mini-graffiti wall that represents your blog using Paint or some other primitive drawing program. I loved doing that, FYI. Very freeing.

Oh graffiti! I haven't ever blogged about graffiti!@#

But you did, thanks Gem.

Thanks for your patience in my previous comments... It was not my intent to push so hard on details, I'm not a therapist or social worker... just someone who loves to observe (and usually write about) people because human behavior so d*mn fascinating. And your descriptions of human behavior are incredibly engaging because they are so powerfully vivid (in a social work/psych kinda way). Seeing the comments to this post, I realize that social workers and therapists read your blog from a different perspective than me... and I can see why the details are less significant for you/them. (Yeah, and I get the privacy thing, too.)

As for the visual you created.. it would also be cool to incorporate the "changes over time" part of it... where the point of intersection becomes smaller, or more distant. What struck me, is that this visual is true of all of our relationships... every person who intersects our lives takes up a little (or more) piece of real estate. We just have to figure out if we want to renew the lease ;-)

thanks again for your patience!

Brilliant, Y. And the amount of headspace/memory/snapshotmemory/bodymemory
call changes over time as we change. You could consider this field for sure.

Breaking up at work:
I left my team of 7 years to join another. Turned out to be easier than I expected, they graciously let me go. Then again, I did have a heart attack in the office.....

Breaking up with my Therapist:
Tired and worn out from all this introspective thinking. I thought I put it in writing, that I wanted to take a break. My husband reminds me that men don't do subtle. Cancelled the appointment for next week. See you in December!