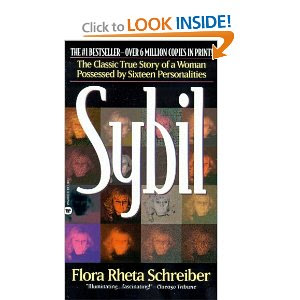 Debbie Nathan, a writer, has exposed Sybil as a lie.

For those of you who don't know about Sybil, she had 16 different personalities, according to Flora Rheta Schreiber the woman who made her famous in the book Sybil.  Everyone in my generation watched the movie with Joanne Woodward and Sally Field. It was on TV.

Like watching the Three Faces of Eve, seeing what appeared to be real mental illness is scary.  As a kid you think, who could fake this?

Now along comes a journalist determined to find the real story, and like any good investigative reporter, she digs in and gets Shirley Mason's (Sybil) true modus operandi.

We thought Shirley had suffered a childhood trauma, developed "alters" to cope with her terrifying world, but lo and behold, her psychiatrist, with the help of a  writer, milked a case of pernicious amnesia to make a lot of money.  Anemia isn't nearly as sexy as Multiple Personality Disorder.

For the clinician, the study of personality development is always of interest.  How we behave, how we come to respond differently in different situations, why one person is extraverted, another shy, these questions drive research, make up the soul of therapy.

And there are so many more roles, so many facets of personality that we try on never thinking about it. Nobody used to say, Just saying, five years ago. Nobody used to say, It's not all about you. Our language is picked up unconsciously, half the time we're not sure from which television show. Indeed some psychologists feel that over ninety percent of what we do, what we say, is unconscious.  That should scare us all into watching what comes out of our mouths.

Why wouldn't personality vary, and vary dramatically? Why not have several personalities?  And under severe circumstances, behaving differently is the only choice, just saying.

But Carol Tavris's review indicates that Multiple Personality Disorder (MPD), or Dissociative Identity Disorder, as we refer to it now, is all a ruse! The story, and then the movie, inspired thousands of more fake stories!  And from this, a classification born.

Now that makes sense.  Thousands, not one or two, copy cats.  Read with me.


By 1980 so many psychiatrists had begun looking for sensational cases of MPD in their own troubled clients—and finding them—that for the first time it became an official diagnosis in the "Diagnostic and Statistical Manual of Mental Disorders." MPD was a growth industry; eminent hospitals, notably Rush Presbyterian in Chicago, opened MPD treatment centers. By the mid-1990s, according to some estimates, as many as 40,000 cases had been reported.

Yet Sybil's story, which started it all, was a complete fabrication. Sybil, whose real name was Shirley Mason, did not have a childhood trauma that caused her personality to fragment, and her "personalities" were largely generated in response to pressures, subtle and coercive, by her psychiatrist, Cornelia (Connnie) Wilbur, whom she wanted desperately to please.

All well and good, a fake exposed. But to toss out rigorous research, the underpinning of diagnostic classification with the swipe of a pen?  She doesn't stop there.


What, then, did Sybil suffer from? Is MPD "real"? Yes and no. MPD is what some psychiatrists call a culture-bound syndrome, a culturally permitted expression of extreme psychological distress, similar to an ataque de nervios (an episode of screaming, crying and agitation) in Hispanic cultures and "running amok" in Malaysia. . .

. . .the promulgators of MPD do not seem to have learned anything. They changed the label to "Dissociative Identity Disorder," but a skunk by any other name is still a skunk.

Oh dear! Promulgators?  Now they're promulgators, not teams of mental health researchers rigorously investigating the presentation of a disorder.  And to compare Multiple Personality Disorder, or Dissociative Identity Disorder to ataque de nervios, a cultural (Hispanic) panic disorder, is a bastardization of the process, we call this the scientific method, behind the Diagnostic Statistical Manual of the American Psychiatric Association (DSM IV-TR). Call it what you will, and the DSM is under it's 5th revision, but each diagnosis is researched to be determined exclusive.  We don't rely upon case study, we frown upon idiopathic research, anecdotal data like the story of Sybil.

To jump from an individual presentation (be it ingenuous or not), to an entire class of mental illness, isn't how diagnostic classification happens.  There are no promulgators.  And to disseminate it at such is clearly sensationalism, fraud.  And to say that those who present with the features of Dissociative Identity Disorder (DID) or Multiple Personality Disorder (see my post) are faking it, is a total disrespect to the thousands who suffer the disorder.

Those of us who treat mental illness do find cases of the disorder, and they are severe, and they usually have roots in childhood trauma.  Those who have been profoundly abused usually don't seek help, certainly can't afford the type of psychiatric care afforded to Shirley Mason.  They haven't the resources, their lives have been altered, and occasionally, their personalities, just like yours and mine are altered, but in a more pronounced fashion.  They are clearly mentally ill.

Call a skunk a skunk, I say.  But it isn't the psychiatric profession that stinks here.

Liz said…
this is fascinating. thanks so much for posting.

Nurse and Hospital Stories said…
Already read Sybil when I was on college. I actually became awed by her story and I was fascinated by how those 16 personalities are put into one body with different behaviors, prejudices and identities.Wow! Yet, reading a study with criticism on that book made me think on some of the documentaries and other books which reveal findings of varieties of researches. Will the fact that we believe today will be obsolete tomorrow? Just like Sybil's case which had been one of the basis of multiple personality by many, now becomes obsolete and a lie. Whew!


Thanks for the share,
Peny@Dental Anxiety: What the Dentist Could Do to Help the Patient
November 2, 2011 at 9:48 PM

Please consider informing your readers about this story reported in MEDSCAPE TODAY:
http://www.medscape.com/viewarticle/752950

Thank you kindly for your attention.

Battle Weary said…
It's been 13 years since the last person "proved" Sybil to be a fake.

Continuing Education for Counselors said…
In all my years (and they are many) of clinical work, I have only had one DID (Dissociative Identity Disorder) case. They are rare but do exist
November 7, 2011 at 10:19 PM

Anonymous said…
i dont think people FAKE D I D/MPD this is bullshit!!! as i know that this is caused by severe trauma the mind can't cope with;
The lady who wrote that article is an abusive Lying nasty bitch that has been threatening people with D I D to "expose them";
i have friends with "D I D"; alot of them are "S R A"(satanic ritual abuse cult survivors)and are "multiple" (yes this exists too more then people know(that was classed and covered up to "as satanic panic", ALSO (s r a)_
That lady is a abusive bitch and a liar;
i don't beieve anything she says
November 10, 2011 at 12:30 AM