Calvin and Hobbs and Reality 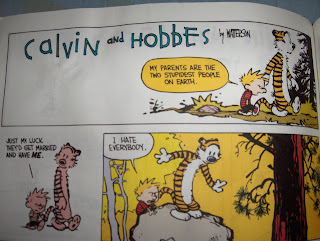 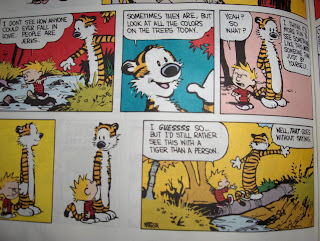 There was a time, you should know, when I didn't watch much television. Except for the Smother's Brothers, That Was the Week That Was, and the Ed Sullivan Show (if he had the Beatles on). It just didn't talk to me.

Then there were years, literally, when there simply was no time to watch. Graduate school sucked me in, and there was the marriage thing and working to eat. And years, and years of child-rearing. During those years the television was the enemy. It was the thing that could potentially steal a child's brain, gobble it up.

And as a Sabbath observant Jew, we simply didn't turn on any appliance on the Sabbath, and it wasn't within the spirit of the law to leave a television on for 24 hours. If you leave something on the whole day, that's okay, but you wouldn't leave something on that you'd be tempted to adjust or fix if it broke down.

So we did very odd things instead, non-electrical things. The kids these days don't understand them. One was called Scrabble (or Connect Four when they were younger). Another had to do with printed pieces of paper bound between cardboard shells. I think these were called books. We read hundreds of them.

The best of them had pictures and didn't need many words. They often rhymed. We've talked about children's books before, and even now my son B. buys his nephews some of the books that I read to him when he was a little boy. Quite frankly, I personally like the newer ones even better, with the exception of the Dr. Seuss books and a handful of others from yesteryear.

The books in our house that took the most abuse had to be the Calvin and Hobbs anthologies. Obie Wan loved them, and I believe he started reading them over and over again when he was about 11.

I tried to be a good sport about it and laugh when he showed me pages he liked. But there was a real element of cringe for me. I thought Calvin's parents were SO mean! They had this fabulous creative kid with so much imagination. His tiger existed. His blanket was a cape. He was Spaceman Spiff, bounding effortlessly for a landing.

The world was a dangerous place. Dinosaurs everywhere. Yet Calvin preferred the great outdoors. Intrepid, I believe was the adjective. So he got muddy, so what?! His mother made it seem a federal crime to play.

Well, there I was in Obie Wan's old room the other day, sweeping out a bit of dust, and I found The Calvin and Hobbes Lazy Sunday Book (Bill Watterson). I took it upstairs and opened it up to a random page (84, if you must know).

There's Calvin in the top panel.
"My parents are the two stupidest people on Earth."

Below it,
"Just my luck they'd get married and have ME."

Following Hobbes to a narrow cliff, Calvin continues,
"I hate everybody."

Third row, left panel,
"I don't see how anyone could ever fall in love. People are jerks."

Hobbes, smiling innocently offers,
"Sometimes they are, but look at all the colors on the trees today."

Hobbes,
"I think it's more fun to see something like this with someone than just by yourself."

Calvin thinks about this. He looks up at Hobbes, last panel to the right.
"I guessss so... But I'd still rather see this with a tiger than a person."

It's hard to read page 84 and think that Hobbes is anything but real, right?

I'm so glad we restricted television when the kids were young. They watched some, Obie Wan even made it a living, eventually, which was why we excused it, knowing he would go into the creative arts. But neither he nor his siblings saw as much as they would have liked. And I'll be the first to say that television is MUCH better than it used to be, and admit that I really enjoy it. With cable we have so many options, movie classics, weather, nature shows, endless comedy and drama. We can watch wars.

therapydoc
Email Post
Labels: Bill Watterson Ed Sullivan Smother's Brothers That Was the Week That Was The Beatles

Anonymous said…
This comment has been removed by a blog administrator.
October 17, 2007 at 9:14 PM

The reason that I deleted your comment and haven't posted previous requests for your dream interpretation is that I don't like doing that, responding to anyone's personal issue. Same goes with email.

This blog is for me to teach, spread around some of the things I learned in school, and I do that as the spirit moves, so to speak. And it's a blog, so you get some of me, and that's how I teach.

That said, I still hold by the theory (I think it's Jungian), that dreams represent fears and wishes. Why a person fears or wishes something symbolized in a dream is up for interpretation.

I love your comments, ANON, and am going to copy the rest of what you wrote right here:

Oh, I have SO much to say about this, and will have to devote an entire post to the "schizophrenogenic" family.

please please tell me more about this phrase and about the pasive aggrestive and what to do with fear and wish dreams and all these dreams where . . .

Schizophrenogenic is an out of date concept that was popular in the sixties and the early seventies.

Before the more recent findings that schizophrenia is most likely a genetic disorder, family therapists looked at the double bind (you can't win, no matter what you do in some families) and found it associated with behaviors occasionally found in schizophrenia, social withdrawal, primarily. I've discussed this in other posts. Check the sidebar and read about expressed emotion.
October 17, 2007 at 10:42 PM

come running said…
Just found your blog and am enjoying it. I come from a family of Calvin and Hobbes fans. The newest fan is my son, who loves to read me his favorite strips. Sometimes I catch him laughing to himself.

come running said…
Sorry, just realized I didn't give you my blog. www.dreamsofwho.blogspot.com
October 17, 2007 at 11:27 PM

Holly Schwendiman said…
Hey dear, just droppin in to say hi. :) Ironic that you'd post about TV as we just turned our service off completely a few weeks ago and are loving life. We didn't watch a ton before, and live TV even less thanks to the DVR, but there are so many better things we want to do with our time than watch TV. So far so great and the kids are thriving. :)

Rob at Kintropy said…
My best friend introduced me to Calvin, and we both mourned its end in the papers. I do give Calvin's dad credit, though, for imagination. He thought up some "unique" stories to spin for Calvin.... At least, that's my perspective now as a father.
October 18, 2007 at 11:52 PM

Linzi P. said…
Calvin & Hobbes tap into a laughter kept deep in my belly... the kind that can pop out whatever the mood/emotion. Nothing like a read through the strips when all else seems pants ;)

Re: Calvins Parents - I think they have to be that way, similarly not having any first names - they are the embodiment of the things which confuse us, irritate us, people who don't understand us - the humour and struggle needs an 'authority'.
January 6, 2008 at 12:01 PM

Unknown said…
Just stumbled upon your blog, and this post instantly caught my eye as a HUGE C&H fan. Aside from Calvin's incredible imagination, I think that he's a kid with some pretty awesome smarts. One of my favorite strips is the one where he's screaming to the sky that he matters, and follows it with the comment "said the dust speck" as he realizes the magnitude of the world in which he lives. Looking forward to exploring the rest of your blog!
August 26, 2012 at 5:41 PM