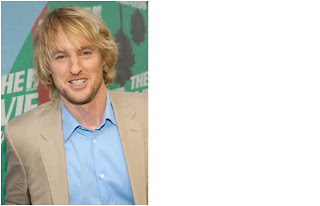 You know that on occasion I get the skinny on Hollywood gossip, right? But keep in mind that my mother-in-law says that her mother used to say, Believe half of what you hear.

So believe half of this.

On Sunday the National Enquirer ran a story that Owen Wilson had cut his wrist and was hospitalized, cocaine in his system.

Then on Monday, Dafne Merkin wrote a piece in the New York Times Magazine (Darkness Invisible) and asked rhetorically:

In a culture that encourages outing everything from incest to pedophilia, is depression the last stigma, the one remaining subject that dares not gossip its name? Does a disclosure about depression, especially from someone who seems to have it all, violate an unspoken code of silence — or, at the least, make us radically uncomfortable with its suggestion of a blithe public face masking a troubled inner life?

She asks that question because the word on the street in Hollywood is that Mr. Wilson really didn't try to kill himself. We are to believe that he is a heroin addict who accidentally overdosed.

And it is his family that wants us to believe this. Rather than expose him as suffering from depression his whole life, the family told the press to spread the word about his "addiction."

Remember, I'm just spreading gossip here, but if it's true, and let's just say for the sake of argument that it is, then the poor guy isn't even granted the right to communicate cogently about his preferred final communication.

And I believe it's half true, the powerful family system part for sure.

Ms. Merkin's piece is written from experience, and is a poignant reminder that although we romanticize depression, it is far from sexy, and our culture respects, perhaps even admires the risky, self-destructive abuse of illicit drugs. Hurting one's self to get high is sexy, exciting.

Battling negative emotions is not.

As FD says, It is still considered a weakness to be depressed, especially for a macho guy like Owen Wilson who plays cowboy roles. It's bad for the career to be weak, as in paralyzed with sadness.

Apparently depression is stigmatic, but heroin addiction is IN. We're still not bored with celebrity rehab. The thought of Paris Hilton, Lindsay Lohan, Owen Wilsons (!?!#) getting stoned out of their gourds still turns us on.

Now, as a therapy doc, I have to tell you that indeed, addiction is not sexy. It is life threatening, no question and most people who have substance dependencies do not want them. The dual-diagnosed, those who suffer from both depression AND drug or alcohol dependency, aren't whistling Dixie, either.

I'm a little worried, frankly, that Hollywood makes out that it is cool to be a drug addict. The message to kids who are already looking to self-medicate for depression is, Get illegal drugs. You'll feel better and you'll be Cool.

Anti-depressants are for losers.*

Mr. Wilson? If you're out there? I hope you get well. Keep at it, for the sake of your talent. You make us happy when you're on screen.

Be our hero, Owen. Take it on. You're in good company.

*FYI, I just read something (WSJ, not a real science journal) about current higher suicide rates for teenage girls associated with lower pharmaceutical prescriptions in that age group for antidepressants.

Shaking my head with confusion,

I think you're right about drug addiction being sexier (and more forgivable?) in our society than depression. Also, it seems anytime anyone does anything stupid in Hollywood, they just disappear into "rehab" -- effectively blaming substance abuse for all their problems.

Poor Owen Wilson... and he's one of the funniest guys in Hollywood! Even he can get depressed.

Thanks for writing about the addiction component; I heard about the attempt but hadn't followed the story. Seems like just as with sex/violence or blue/white collar crime, it's another example of how bizarre American culture's standards are.
I wonder if the addiction also seems sexier because it appears more as an active decision gone awry rather than something the person had little conscious choice in? Or perhaps we imagine--and enjoy imagining--ourselves taking our own indulgences too far? Or not. Well, that's enough armchair hypothesizing for tonight, have a good'un.

It's weird, it's like we're supposed to think that depression is somehow your own fault but addiction is not, when neither are. Poor guy, I hope he gets better.

Funny guys are most vulnerable.

Billy Crystal writes books--I Already Know I Love You, 700 Sundays, Absolutely Mahvelous and more-- and Robin Williams, too, are very frank comedians who don't run away from their depression.

Like I've said before, What goes up, must come down. It's neurological.

The idea EMY of using gone awry in addiction is interesting and maybe for some it is what makes it so "sexy."

I once started watching that movie, Eyes Closed Shut(?) but couldn't finish it. The idea of eyes closed shut, and acting on impulse, diving into something dangerous. . .

I guess it would get the serotonin pumping for a lot of people,

Here's a great post about the rate of suicide increasing in teenage girls:
http://thelastpsychiatrist.com/2007/09/youth_suicide_rates_up_not_so.html

I love Owen Wilson, and I hope his recovery goes well.

Thanks for the link!

Thanks, Mom, for writing about this.
I think that celebrities - and those in a relative position of power - have a responsibility to publicize those issues with which they struggle, that, however common, "laymen" often enough kill themselves over (partly because they feel so alone).
I realize that's hardly an original thought, but especially in a time and country where indulging in celebrity gossip for its own sake is reason enough, at least maybe some good could come out of the habit.

Addiction, depression, and suicide attempts go together like bread, butter, and jam.

What we see about celebrities is their very public side. In their private lives, they are just like the rest of us. Appearing successful doesn't mean you are happy. Some are but a lot more seem to have difficulties handling the stress and publicity. Addictions are not fun or sexy or exciting. They turn many of us into people that are not even likeable to ourselves. Thanks for the article.

This is a great blog. Suicide is a tremendously difficult issue, but it's more difficult to treat when one cannot come to terms with the source as in this case, depression. Society and family members don't make it easy either.

I have only had some depression in my life, but I have suffered anxiety my entire life. It is horrible and crippling. I am fortunate that I have found a drug that works for me, and I am so much better it's amazing. I still have it, don't get me wrong, but I don't have it nearly as badly as I did before the meds.

Anyway, I also hope that Owen will be able to battle this. I am no longer shy about talking about my anxiety and I do so on lunatail.com. I admire people who talk about depression, too. Nothing 'cool' about either of them. They feel awful. The sufferers need treatment.

Owen, you do make us happy when you are on screen. You shine like a bright light, you have great energy and spirit. I hope you will fight this, and win. Winning the fight against depression, now that is very 'cool'.

You know I said the same thing to my sister when I heard about what his family had to say. Heaven forbid they admit that the guy suffers from depression. Rather the world think he's a DRUG ADDICT than know the real, horrible truth that he's depressed.

This strikes close to home because I'm struggling with this issue right now and it does feel like a massive stigma.

All of my life my father has told me "it's all how you look at it and if you try hard enough you'll be happy." He's said this so much that I really hate that saying now, but still feel that if I tried hard enough I could change the way I think. The resulting feeling being that I am failing terribly.

I've been going through some SSRIs for the last six months trying to find the right mix and it's miserable, as you know.

I really don't get why it seems like such a huge stigma in society, but I certainly keep it close to my vest in real life.

Not on my blog. On my blog I'm an open book with a blank cover. Thank God for the blog, eh?

Your dad thinks we're all Captain Kirks, officers who can make it so upon demand. Wouldn't that be cool?

Found your blog today. It's refreshingly vast in it's topics and entries.

I really appreciate your post here about society's stigma on depression. Although it's so sad, I fear you may be right. Drugs are much sexier than depression (or so we're made to think).

I especially love this little excerpt from your post:

I couldn't agree more! It's worth the fight. And the fight is heroic!

What's Going to Be with Our Kids?