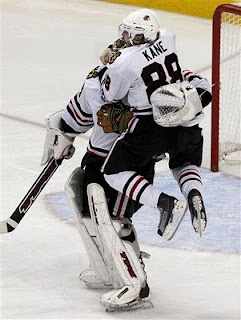 What kind of a fan would I be if I didn't say something about the Blackhawks? Last night they won their first Stanley Cup since 1961. Now that was wonderful. It doesn't get better than this for Chicago. Of course, we want to know, why are people still playing hockey mid-June?

A few weeks ago I went to a baseball game, watched as the St. Louis Cardinals clobbered the Chicago Cubs, as usual. It was all too depressing. Real soon I'll get serious, write a therapy post about managing this, depression and sports. Or just depression.

Last Thursday I canceled out and got on an airplane, returned with a carousel of slides, invited all my friends over to see pictures of my trip to France, Germany, and Italy. 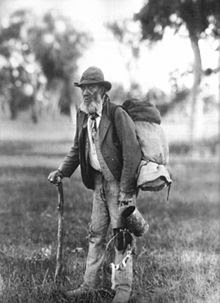 Why Matilda?
The kid is a little cranky and his Mom tells me,

And she's right, of course. It's a smile that lights up the room, and the chant, Tilda, Tilda, delicious. The next Matilda he meets, he'll surely follow home.

Waltzing Matilda is a folk ballad written in 1887 by Australian poet Bajo Paterson. This unofficial national anthem is the story of a swagman or hobo, a drifter who carries his few things in an over-the-shoulder sack hanging from a stick. The swagman in the legend is caught steeling a sheep, a crime punishable by death in Australia, circa 1887. He hastens the execution by ending his own life, then returns as a ghost, apparently to dance.

This isn't going to be good for my kids, is all I can say, when they hear the real story. One can only hope that the song loses its glitter real soon. 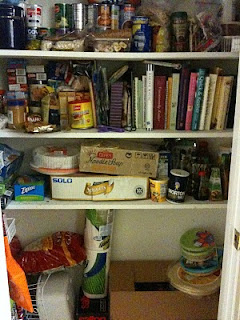 I chose Atlanta over Paris because Rak told me her pantry was a mess; she needed me. Although many people, maybe most, resent their mothers-in-law when they begin to clean, move things around, meddle in their lives, Rak does not, knowing I'm a total sucker for a good pantry. 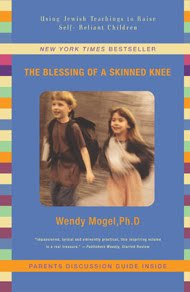 The kids belong to a book club and wouldn't you know, they sent Rak a parenting book, one I'd read about on DaMomma's blog. Rak hasn't read it, she hasn't got time to do most things, but child psychologist Wendy Mogel had me at the title-- The Blessing of a Skinned Knee: Using Jewish Teachings to Raise Self-Reliant Children.

You know how I feel about self-reliance (a.k.a. independence) and taking calculated risks-- both good-- maybe to the degree that a person breaks a little skin on occasion. At least get a paper cut without freaking out.

Skinned Knee is a quick read, one full of good behavioral strategies for parents, and lots of fabulous theology, if you like that sort of thing.*

It's a jungle in Atlanta in the summertime, all green and wet and fertile. You can't predict the weather; it changes hour to hour, minute to minute, but you can count on the humidity. At least that's how it is whenever I visit. But they grow bamboo in the backyard, so it feels very exotic, if wet, and hardly ever snows, which might be a good thing.

Before picking up Skinned, I was in the middle of a war novel about Viet Nam, a random find at the library. 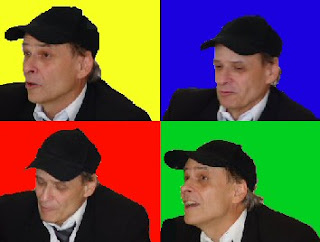 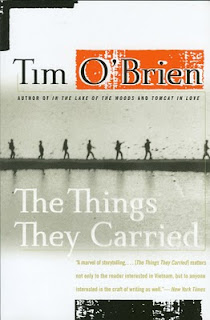 Tim O'Brien, the guy with the baseball cap, author of  The Things They Carried, had to make the decision that many draftees made in the sixties,

Do I run away, dodge the draft, move to Canada?

Do I fight a war I'm pretty sure I don't believe in?

Mr. O'Brien chose war rather than cope with the townies whispering coward behind his back. Shows how far we'll go for our reputations, what we'll do to avoid bullies.

The Things They Carried is literally about what they carried with them, our troops in Viet Nam, and the telling of war stories. He tells us that if you don't tell your stories, if you don't talk, you will be sick.  One story, perhaps the most powerful, is about a soldier who can't talk about his experiences in Viet nam, post-war. The best he can do is drive around the lake alone in his father's old Chevy, again and again and again. He can't talk and he doesn't make it, doesn't survive civilian life.

You read this book until you can't take anymore stories, then you put it down, take a break, read something else. But make no mistake, you come back to finish it. The things they carried, some heavy, some symbolic, all terribly, terribly lush.

I don't have a photo of the tomatoes or flowers, but on one of my walks with my granddaughter (4) we met up with a typical Southerner who offered us starter flower and vegetable plants to take home and plant, which we did. Another neighbor wouldn't let us move on until she packed us up with fruit and crackers. This is not a Yankee town.

We had to go to the Botanical Gardens, of course. FD is a very empathetic guy, you can tell, communes with nature. 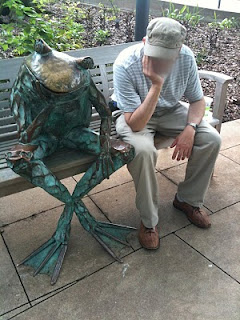 They have flowers there at the gardens, and frogs, and the trees hug you, apparently, if you're not careful, with their oxygen. 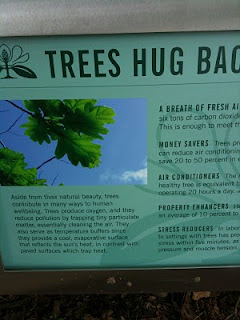 Trees Hug Back is the headline.

Remember that bumper sticker, Have you hugged your kid today? What happened to that campaign? Probably too much hugging-- all those helicopter parents spoiled it for everyone.

FD found us a new park to break in, complete with nature trails made from recycled tires. 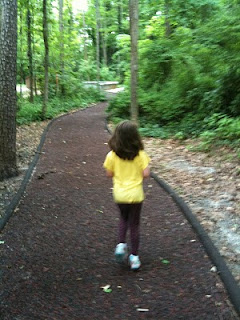 You young people may not even realize that there was a time when a kid had to skin his knees. There was no choice. A playground was a dangerous place, none of this soft landing stuff. 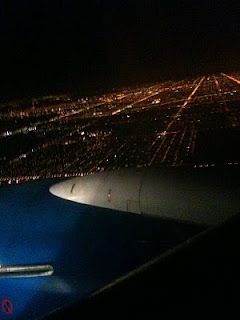 That's an AirTran wing.  I did not sit with FD, and the fellow who had the window seat to my right, James, did his best to get out of my way so I could take a picture.  But it was still hard to focus from the center seat. James had pushed out his hand for me to shake the moment we made eye contact, and it was refreshing, such natural warmth. I think it's a southern thing, but we do feel it, sometimes, when we travel by air, no?

We landed in Chicago, fairly softly, Sunday night around midnight, about as softly as one can on that short runway at Midway.

Although there's nothing insignificant, you have to agree, about ghosts.

*Some of us might consider this a kiddish haShem, (rhymes with skittish ha! gem)a positive force in the universe.
at June 09, 2010

Email ThisBlogThis!Share to TwitterShare to FacebookShare to Pinterest
Labels: airtran, bullying, ghosts, Motherhood is Not for Wimps, The Blessings of a Skinned Knee, The Things They Carried, Tim O'Brien, Waltzing Matilda, Waltzing Matilda Centre in Winton, Wendy Mogel

And that sculpture of the frog on the bench would invite me to visit the gardens, too.

You want to come organize my pantry? Actually, it's my basement that could use organizing.

Oh, I love a good basement.

Your writing sounds like you are doing better. I hope that is the case.
Getting away even to organize a pantry seems to agree with you. Your activities while there sound cleansing; cleaning pantry, new book about skinned knees, an outing at the Botanical Gardens and a visit with a handsome frog, and soft landings coming home. Sounds lovely to me.

Yeah, the Cubs can be depressing :).

Tom Waits has a variation of waltzing Matilda that is interesting.

The South is steamy today.

Nope, nothing insignificant about ghosts. Especially dancing ones.

When you choose Paris over Atlanta, let me know.

"What happened to that campaign? Probably too much hugging-- all those helicopter parents spoiled it for everyone."

To add to the Tom Waits version (called "Tom Traubert's Blues"), definitely check out Eric Bogle's "And the Band Played Waltzing Matilda," which is a classic in its own right. Great song about the pointlessness of war.