You may know that when it's cold outside I love taking the bus. Yesterday I insisted on it because FD needed the car. He could get me to work, but not home. The bus works just fine for me.

We share one car, multiple reasons. When the weather is good FD always rides his bike. But when it is bad, schlepping one another around to stay warm, which for others would feel like a hassle, feels intimate. Let's call that auto-intimacy.

This year Chicagoans have to use the new RTA card--the Ventra. It came in the mail. A friendly city employee even called the house to encourage us to use our new cards, charge them up, fill the city coffers, put those pieces of plastic to work. This is Chicago, calling every home-owner is quite a lot of calls! We can only hope it is stimulus money paying for it.

But I never got around to activating my Ventra card, still packing twenty dollars worth of rides on the old one.

And last night I board the bus, and fumble for the one I bought from Walgreens (left). As the driver pulls away from the curb I ask, “Do these still work?” Then I notice that the old card-insertion hardware is still right there and swipe my old card through the slot.

Because Chicagoans have been known to occasionally go postal on bus drivers ( wish I was making this up), drivers are now shielded from passengers by a thick plastic divider. My driver is mouthing words on his side of the divide.

“What?” I shout, like the hearing-impaired elderly I am becoming.

I look up and it feels as if the eyes of the entire bus are on me, a bus chock-full of seated passengers. The only seats left are for differently-abled passengers. After sitting and listening to people’s problems all day, I don't mind standing, like it.

At the next stop a stocky ruddy-faced older guy in a tattered blue ski jacket, knit cap, slowly boards the bus. “It’s slippery on the sidewalks!” he exclaims to the driver. He takes a seat in the differently-abled section that faces the aisle, his back to the window, facing me.

His eyes meet mine often, then dart away, as do mine. Finally, he can take it no longer. 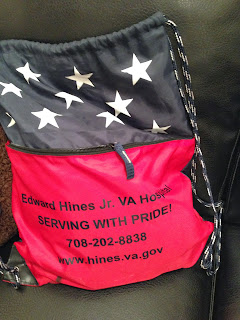 The nylon Veteran Administration sack is something that neither my mother, nor I, apparently, could give away. She never used it, but I did-- large, strong, light-weight. Good zippers. My father loved going to the V.A. for his medicine, his hearing, and his eyes, the little things, even though it was about an hour away. He shouldn’t have been driving, either, in his late eighties.

"Were you in the second World War?" I ask.

"No, Korea. Then Viet Nam. Then I joined the Foreign Service. They pay you for that."

"Wow, thank you for your service. I'd take my hat off to you but it's too cold. What do you think of the new deal with Iran?"

"If it saves lives, I'm all for it," he says, serious. "I'm for anything but war. You know they just put on a new wing a the Hines V.A. and it is full of young people missing arms, legs, all kinds of dismemberment. Wars. Bombs. Lots of young men. Women. It's a beautiful wing of the hospital. For them."

We ramble on a little more about politics, and a woman sits down next to him, captures his imagination. She looks homeless to me, has a worn carry-on bag with all kinds of bold letters warning others not to tamper with it. She reaches into another bag and finds something to munch on and I turn away, look out the window.

I hear my friend asking her, "Are you diabetic? Cuz if you're diabetic you shouldn't be eating that."

I look and see she has an  Entenmann's chocolate crumble doughnut and is feeling no pain. "I ain't diabetic," she replies. She smiles broadly at me and I smile back.

A new passenger, a diminutive woman of color, has a seat. Our war veteran immediately turns his discussion to her. He knows her. "Of course I have it!" He reaches into his pocket to grab his wallet and thumbs through the cards, finds what must be a discount card to something. In the process an ID falls to the floor and I reach for it, return it to him. The woman is thanking him profusely for the discount card and he smiles at me, thanks me.

At his stop, as he rises to go, I introduce myself, tell him I hope to see him again. He offers a warm, beefy hand and tells me his name. "Thank you again, thank you so much for picking up that card," he says sincerely. "At my age, you have no idea, it is so hard to do things like that. I'm eighty, you know."

"No problem, you're welcome. Live long and prosper, sir"

A good story. Hope that you had a good Thanksgiving and Hanukkah.

I remember my mother saying, of soldiers she knew who returned from WWII and including my father, that anyone who had actually been in a war hoped there would never be another one. I thought of that when I read about the new wing at the VA, full of people who'd lost arms and legs and had other serious wounds. Your experience on the bus sounds rich and deep. Thanks for sharing it.