Here's where we take off the gloves. I'm going to try to be fair, but as always am biased by what I've heard people talk about in treatment. In this case it's the hundreds of stories (100s?!) from people who have cried about the terrible pain and abuse they've suffered from the evil machinations of STEP-PARENTS.

I've talked to men and woman who remember violent beatings, emotional torture, and sexual indiscretions. More horrible stories about STEP-FATHERS, frankly, than about STEP-MOTHERS, but I'm willing to acknowledge that my sample isn't representative. (Hey, the PhD was worth something).

Anyway, it's safe to generalize that health professionals get to hear every conceivable combination of horrendous parenting behaviors known to man. (And you envied us our in-roads to the human psyche, all that talk, all that gossip. Maybe my friends were right about switching to real estate.) Being a therapist can be freaking traumatizing at times. But you get used to it.

Let's focus, instead, on the irrational spleen of young people and the displaced anger that they thrash upon clueless NICE step-parents who naively walk into a second (or whatever iteration) marriages. Their new young'uns, being young, do perceive evil and danger and are on the defense. They DID watch Cinderella. Which is what they say.

Eddie is 8. His mom died in a car crash when he was 6. He lives in a very loving community and has a very loving dad, and two older sisters, 10, and 12. His mom, well, she was his world. After the crash he cried, had tantrums, his behavior in school was horrible.

His grandmother, Dad's mom, moved in and took over most of the cooking and cleaning so that Dad could go to work every day. Gram gave in to Eddie's tantrums and excused his anger. Everyone, for the most part, felt pretty sorry for him and tried to comfort him. After awhile he quieted down, but occasionally he would act out, steal something, break something. He was a little boy, at the end of the day, and he had a lot of energy.

Fast forward, Eddie's 14. Dad's finally dating a nice woman he really loves. Miranda is a nurse who works her tail off and has never been married, never had kids. She's ready to take them all on, make them hers. She knows she only has time for one biological baby at best. She's already forty. She and Eddie's dad get married. At this point Eddie hasn't looked at her for the four months prior to the wedding. Now that the two are married, he refuses to listen to Miranda, won't cooperate with her ever, never makes eye-contact.

MIRANDA: Eddie, the car pool will be here in ten minutes! You better get dressed.

MIRANDA: Seriously, Eddie. You'll miss your ride and your dad will be upset. Why not just get going?

It's always like this. Eddie is the spokesperson for all of them, but the message is clear. Miranda's good intentions are definitely not appreciated. And these are not SUCH bratty kids. But things go from bad to worse and three years later Miranda feels very, very cheated and she is sorry that she married their father, who still feels guilty and misses his first wife.


Now, for you, Dear Readers, to understand how family therapy docs approach this problem, I need to introduce you to some family therapy lingo, stuff I'll build on in future blogs (promises, promises). Let's start with:

Everyone knows what a triangle is. Start with 2 people who get married. That's a nifty dyad. When we draw family trees a square is for males, a circle is for females, and a line connects two commited partners. This is your primary DYAD.

Add a child, and bingo—we have a TRIANGLE. On the diagram, a verticle line descends from the one connecting the partners to the child. Forgive my primitive picture, folks. I'm no artist. 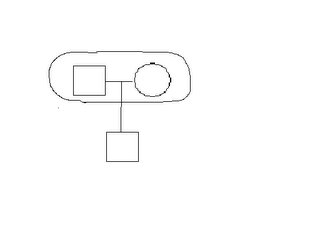 The children are below the parents, because, hey, might makes right! Or would you prefer, because children should be listening to those who are older and wiser?
Symbolically, parents SHOULD be higher up on a hierarchy for all the right reasons.

They are THE MAIN DYAD of a family because optimally they should conspire, make decisions, and share intimately in the five areas of intimacy that I have touched upon in the archives.

Y'all should have a look when you have a little reading time.

Lest we forget, the five intimacies that committed partners really need to make a relationship fly, are Recreational, Work, Problem Solving, Emotional, and Sexual (according to Therapy Doc). We could and really should, add Spiritual Intimacy since so many couples seem to have trouble negotiating each other's belief systems—but ordinarily I'd put that under problem solving. But it can be a real plus, feeling that the other partner is into the same future beyond this world as we know it.

Ah, but I digress. Back to the EVIL STEP-MOTHER.

So IF the marital dyad is the tightest, and the kids are loved but not primary in the decision making process, then whatever shall we do with HER? . by the way, if one of the marital partners is severely disable this changes how healthy families work. You can't have a violent person as the head of the family—or shouldn't. .

HER is the EVIL STEP-MOTHER.

Enough for tonight. Tomorrow I'll write and explain what I mean by pseudo-intimacy, triangles, and how families can begin to solve the STEP-PARENT CONUNDRUM.