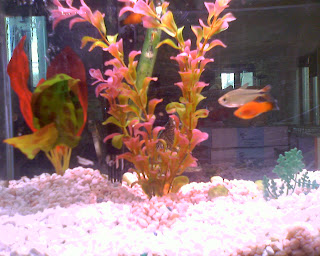 They're beautiful, aren't they? Each one $1.25, and I probably paid too much.

I had just about had it with the week last Friday, when FD turned to me in the late afternoon and said,

"You said you wanted to go visit that fish."

The story is that my son found him on Craigslist--a four inch Huma Huma (see video below) to be sold in Wrigleyville on the cheap. Saltwater Guy says on his blog that he and Cham wanted a trigger, because they needed a fish that could handle stress.

His tank is about the size of my saltwater tank and I keep one fish, Blue, who is very happy to be alone and not feel he has to compete for food. Blue keeps his tank clean and he assumes that roommates are likely to be slobs, so it's not easy to live with him.

He figures, You never know who raised them or what kind of families they come from, new fish, and you know, it's possible that they went to all the wrong schools. 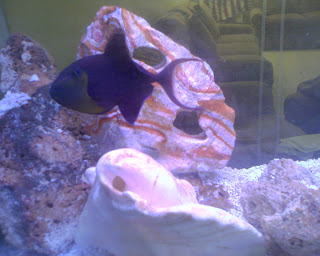 Blue is for sure something of a snob, but he's beautiful and beyond correction at this point.

Although they assumed that the Huma Huma would be too big for their tank, they had to do it, check him out, because on Craigs List the owner wrote the following strange description:

The fish likes to be pet. Cham could not resist this. She's always wanted a dog.

I thought it a sadistic Wrigleyville trap. A Huma Huma is really a Picasso trigger. If you know about the saltwater trigger family, triggers have decent sized teeth and are known to take off bits of fingers. People don't really think about petting them for this reason.

So the young marrieds left for Wrigleyville to take a look at the petting Huma Huma while under the influence of dinner at my house: broiled white fish, potatoes, cauliflower saute'ed in tumeric and garlic, and salad.

They bought the huma. He was an amazing deal, too. Only later did it occur to my sensitive son that he ATE fish before he BOUGHT a fish. When I pointed it out it did upset him, but he says he only ate a little bit.

They bought Huma, and FD and I visited our new grandfish that late Friday afternoon. It was definitely the highlight of the week and inspired me to buy a few new freshwater fish. I rarely talk about the freshwater tank because I'm so partial to Blue, who is, well, blue, and a saltwater fish, as one might expect. And he's interesting, too, you know. He moves rocks. One day we'll discuss this at length.

Whereas, the fish in the freshwater tank are rather pedestrian. For about a year, Hi Ho Silver had the not always so fresh freshwater tank to himself. I was too lazy to get him some friends. Indeed I got sick of replacing the mollies who died if I looked at them.

Inspired by Saltwater Guy's purchase of the Huma Huma Picasso trigger, I stopped off at PetSmart (they do seem to keep their tanks tidy) and bought three new orange and black platies for the freshwater tank. And while I was at the fish store, I picked up a bunch of frozen cubes for Blue, too. They freeze food into miniature icecubes for fish these days.

Except that when I got home and examined the package, it read "For Freshwater Fish." Meaning the cubes were not for Blue, a fish who can easily down a whole science diet cube all by himself.

Generally a picky eater myself, I was afraid to plunk a big cube like that into the freshwater tank. Maybe Silver and the new fish would eat too much all at once and die, all of them, right there, that night, in my kitchen. They're delicate, small. They eat flakes.

As they nibbled voraciously I worried and worried. It was terrifying, seriously, the thought that I'd overfed the fish. But suddenly, as if on cue, they stopped eating. An uneaten half of cube hit the stones at the tank floor and remained there, untouched. None of them cared to continue.

It was as if everyone agreed, "Wow, that was great. Let's play cards."

And the next day, when I got home from work, they had cleared off the bottom of the tank, finished off the last bites of cubed veggies and chubs, or whatever it is they put in these scientifically determined frozen fish cubes.

So you see, my friends, the lesson is that we can learn from our fish, ease away from the table when we've had enough. Or get off the floor, or the sofa, or wherever it is that we're feeding these days. And maybe go for a swim.

Email ThisBlogThis!Share to TwitterShare to FacebookShare to Pinterest
Labels: eating what you need to eat and no more, niger trigger, picasso trigger

"YoLenny! You can come out of the closet now!"

Huma's got some serious passive/aggressiveness going there, don't you think? Maybe a compounding lab could mix some fishy fluoxetine in Huma's flakes. ;)

You do have two shuls in that tank, don't you? You gotta have one that they'd never set fin in. ;)

What do you feed them during Passover? If the fishy flakes are medicated, maybe you could get a heter.

Chana is referring to the old Jewish joke about a guy discovered on a desert island. He shows his rescuers around and they see that he's got 2 synagogues on the island, deserted, remember.

"You built 2 shuls?" they ask, incredulously.

shrink on the couch said...

I feel for Lenny hiding in that rock hole. Huma looks like he is strutting his stuff, flexing his gills, very aware and determined to keep Lenny cowering in his hole. Oh the endless potential for interpretaions and projections, huh? : )

LOL! You introduce us readers to the most amazing things. Even the word Huma is a laugh. I will, however, take the eating lesson seriously.

The "you get it" was for PhD, not that Barb doesn't. Thanks Barbara, I really just have to share, and fish have been a part of my life since my eldest became interested in them. They're good company.

Oh, he's amazing. I thought that beta went belly up.

The irony of your son eating fish before he picked up a new fish was not lost on me. I'm surprised you had to point it out to him.

Also I did really enjoy the parable, of sorts, of the fish and food. Well done!

"Grandma, have you seen Nemo?"

You're working up a good routine here, Chana.

Hi there! Thank you for visiting my blog. I am glad you enjoyed it.

Your post was most interesting. Thank you for submitting it to the carnival!

It's the best defense mechanism I've got ;)