Denial and the Predator

I was so upset about this I almost wasn’t going to tell you about it. Embarrassed and upset.

Sometimes when you get something new, you neglect the old, or maybe you just don’t give it it’s due, the respect that it deserves.

If you look carefully in the photos in a previous post, Fish, Stress, Pets and Shoes, you’ll see that there is another fish in the tank with Velvet. In that post I went on and on about the loss of Velvet, a probably fine fish in his day.

But if you look at the center photo and you’ll find the grouper, a guy I never named. We just call him The Grouper. He's never had much attention from people because he's extremely shy and hides behind rocks or in a conche.

The fact that The Grouper was a little less good looking than Velvet shouldn’t have had anything to do with him not getting attention. He’s a fine looking fish in his own right, with amazing eyes that move sideways and wind around like a disk. His markings are extraordinary, if not colorful,(see photo below) and we have an excellent relationship.

I guess because I feed him, I'm as close to Mom as it gets. When I wear my polka dot shirt he goes absolutely nuts. He’s a spotted grouper, a predator fish.

When I bought this guy the man at the store warned me, As long as you only buy fish that are his size or larger, he should do well with any other fish you throw in that tank.

It’s a 30 gallon tank. Lots of room. That’s why I didn’t hesitate to buy Velvet, a bigger, if not very healthy, friend for him to pal around with, play cards, whatever it is they do.

And as you know, Velvet passed on to that big aquarium in the sky. I told myself to stay away from fish stores for awhile since this was locking up endorphins, losing fish.

Dovid and Chammie, my son and d-i-l, came to visit for Thanksgiving. Dovid and I went out to buy some shoes the Friday after. Chammie had better things to do with her time, brainy things. You gotta' respect that.

Dovid is a true aquarist and when I’m with him we always stop in to look at fish if there’s a pet store nearby. Well, there’s a Petco a stone’s throw from the DSW in Skokie.

A maroon clown caught my eye and he was only fifteen bucks. In my head I was measuring him, putting him up against the grouper, and in my head he matched. In reality he did not. It is this skewed lens we're talking about in this post.

Sure, I bought him. I sort of forgot that little piece of advice,

As long as you only buy fish that are his size or larger, he should do well with any other fish you throw in that tank.

It was early in the day, so I dropped Dovid off and plunked the maroon Nemo into the tank. The grouper emerged, looking bigger than Nemo but not angry. He gently tapped Nemo out of the way. Nemo hid behind a rock. The grouper retreated to his shell. I ran downstairs to shlep up a new tank just in case they really didn’t get along, prepared to flip Nemo into a safer home.

It took me about 10 minutes to get the 5 gallon salt water hospital tank ready. A record, honestly, although I hadn’t tested the water yet. I checked to see how the guys were doing. The maroon clown was literally in the jaws of the grouper.

S. came home and noticed that I had set up the other tank, but we were ships passing in the day, hustling around trying to get Friday night dinner ready. He didn’t say anything about the little tank, usually considered the hospital tank, a place to quaranteen a sick fish.

The kids came over for dinner, and Dovid apparently showed Chammie what was going on in the big tank. The clown wasn't that small, obviously. Four hours in The Grouper's tonsils, and still he struggled to swallow or would that be chew a large fin sticking out of teh side of his mouth. I have never seen teeth on this fish, but he has an enormous mouth.

Cham was majorly grossed out. I was upstairs getting dressed.

Dovid said to his father, “So, you lost a fish?”

S., assuming that Dovid was referring to Velvet, said, “Oh yeah, old news. Mom’s over it, I think.”

I came downstairs and Chammie paid condolences right away. “WOW, MOM, THIS IS REALLY HORRIBLE.

S. seemed confused, so we explained the whole thing.

He said to me, “Didn’t you read my comment on your blog?” He was referring to the one on Thanksgiving and loss, the loss of Velvet, who passed away I'm pretty sure of natural causes. I spoke of his loved ones perhaps missing him.

I had been warned, after all.

So why, if I’m so embarrassed and upset (and I’m still upset a week later) am I sharing this with you?

Sometimes people ask me to define denial. Denial, my friends, is not wanting to look at reality, Being in denial is ignoring the negative consequences of what you do.

Denial is considered the most immature of all of our defenses. LITTLE KIDS are great at denial. It is their primary defense.

I do NOT need a new diaper (funny smell)

I did NOT take a cookie. (crumbs are on the mouth)

I did NOT wake up my baby brother (baby’s screaming).

That fish is NOT too small for the tank. The Grouper eats so well, he doesn't need to do that, eat a fish just a little smaller than himself

All I can say in my defence is, I’ll work on it. 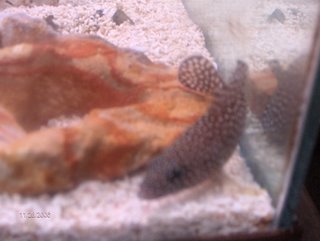 Here's our not so little predator. I have to tell you. He's looking pretty guilty at feeding time. No joke. He acts like he's not hungry, then, as soon as I leave the room? Food disappears miraculously. All gone.

Girlplustwo said…
ahhh...what responsibility you are taking. i love how you wrote about this, and how it factors into the choices we all make, and deny, and defend.
December 3, 2006 at 4:22 PM

bean said…
Too bad about that fish... I love maroon clowns! But at least in death the cute little fish teaches us a little something about life, risk-taking, and denial. From now on, predators only in that tank!
December 3, 2006 at 10:13 PM

therapydoc said…
Thanks Bean, for that e-mail. When I stop traveling I'll start up again with this nonsense. Until then, peops, you're safe from any more fish stories. Uh, no promises.
December 4, 2006 at 9:50 PM

Anonymous said…
Happy birthday, Linda! I didn't realize it was your brthday. Too many Freedmans, ergo too many birthdays for an old guy like me to keep track of.
Speaking of birthdays, Max had his 16th last Sunday. The very next morning he tok his driver's license test, passed, and we haven't seen him since.
Many happy returns to blogging.