Kids at the Movies: ALVIN! 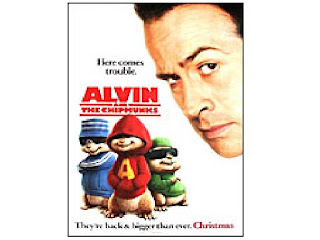 There are so many great psychological stories I'd love to tell about litle kids.

And now that we have a few more of them in the family (grandchildren that I can subvert and hypnotize at will, little people who seem to enjoy the whole procedure, one that involves exhausting me to tears) it's easier to see the light side and to take the time to actually write the whole business down.

We got smarter phones a few months ago, and I get text messages a few times a day (if you have enough kids you can do this, it's a perk), some with pics.

At a wedding the other night I got this text message:

Took munchkin to the movies. A disaster.

Well, what did he expect? She's not even two.

Left the party early, came home to putter around and saw an email from him telling the whole story to the family. We do that, send the first degrees family email. Everyone uses the Reply All option so we can report on menus (it's important to know what people had for supper, all right?), review movies (I'll rarely go unless a film has been cleared by one of them), and talk about whether or not ANYONE saw Desperate. Here's what he wrote:

We just came back from a DGA (i.e. free) screening of Alvin and the Chipmunks. We figured it would be a good test run to see how the munchkin could handle a movie.

The film starts with the titular chipmunks high in a tree. They're singing and gathering nuts. Soon, a chainsaw is heard, the tree begins to shake, and then fall. At that point, a little girl SCREAMS at the top of her lungs, followed by "(my granddaughter's name) no want it!"

We stayed about five more minutes, and finally left when the munchkin told Rac she was scared. Ah well.

Rac added to the replies,

I believe the exact quote was "Chipmunk movie too scaaaaaarey."

I reminded everyone that when FD and I took our two oldest (one of whom is the munchkin's father) to a Sunday matinee as toddlers, a scream rang out in that theater, too, causing literal pandemonium.

I thought he'd never get over it.

Transgenerational, you would think, except it wasn't munchkin's dad who caught it. It was his twin brother, her uncle.

So the moral of the story. These flicks look innocuous, but that doesn't mean they are. Oh, that penguin movie's got some pretty scary scenes, too, btw.

Email ThisBlogThis!Share to TwitterShare to FacebookShare to Pinterest
Labels: Alvin and the Chipmonks, Bambi, movies for kids

Thanks for sharing. Everyone reacts differently to these things. Good to know!

Good thing you stayed away from Sweeny Todd, unlike us.

Forget the kids. I couldn't handle Sweeny Todd, as much as I like some of the music.

I heard that the Chipmunk movie was terrible so I did what every smart father does...called grandma and said I had an opportunity for her and her grandchildren. ;)

Even in my day, it was known that Disney made the most traumatic movies, not good for kids. all based on dead mothers...

Fairy tales in general are scary, right? But maybe the Disney family had to work out something. Is there a paper on this out there?

Didn't Bruno Bettelheim, the child psychologist who wrote The Uses of Enchantment, believe that fairy tales actually help children advance through stages of psychological growth? Supposedly, through reading about these heroes and heroines, then acting out the stories in their play, children learn strategies for dealing with real life problems.

Do you think Bettelheim's at least partially right, or is this just a load of porridge?

You guys know how I feel about what doesn't kill you makes you stronger. Sometimes yes. Sometimes no.

In Chicago Bruno's reputation soured when allegations of child abuse and neglect at his "school" surfaced in the 70's. I think it was the 70's. And we think he forged his degrees, too.

This is weird but, since I let my son start watching moderately scary movies his night terrors disappeared.

It makes sense, behaviorally. The scary movie has a happy ending. Nobody gets hurt. All's well. Let's eat.

My mother took me to see Bambi when I was 8 and I sobbed!! And she was like, what's your problem??

I've be overprotective as long as I can ;) She has my sensitive side, she understands that my mom died young (at 49), and she gets extremely upset if I trip or fall, because she saw me have a bad fall where I needed 19 stitches...

CHANA, I had no idea all the Disney movies are like this. This does, however call for the most important strategic family therapy technique of all,

WALK OUT OF THE MOVIE WHEN IT'S BAD.

I don't know what it is about our culture, especially our popular culture, that just can't let kids be kids.

I just got a call last night from my 12 yr old daughter that she couldn't sleep because she'd watched a show that her older cousins thought was fine. It was about a crazy mother beating her kids. What I want to know is why is that called entertainment?

Our world has really gotten out of whack...

My family management technique is, "no, you may not go see/watch that", but I've been called everything from a control freak to a religious fanatic to (snidely)a 'true believer' by the ILs for that. (roll eyes)

Authormom - I think it 1) feeds adults' voyeuristic curiosity, 2) relieves guilt by displaying behaviour they can watch in horror and exclaim, "That's horrible! Thank G-d I'd never do anything THAT bad!" 3) relieves guilt by displaying behaviour others will watch in relief and say to themselves, "whew. I'm not the only one. I must not be the ABSOLUTE most evil person in the world!"

I don't know how you do it, TD. Having been on the receiving end, and having so much fight in me for the underdog, I'd want to hurt someone sitting in front of me and talking about having committed behavior like that.

We look for the wonderful.

I don't know whether I should laugh or not but I have to admit that my mouth is curving up into a smile. Then again, I don't have children of my own yet. Perhaps it would be useful to keep this tip in mind since a lot of you seem to agree with each other. It makes me wonder what movies scared me to death when I was a kid...

How do you more the worries and fears to see the wonderful again?

And let's not forget television! I still get scared when I hear someone whistle the Alfred Hitchcock theme and there was a Thriller episode that kept me awake at night for months.

Anon, you have to WANT to see it (the wonderful).

No, actually, sometimes you have to ask someone else who knows why another person is the way he is to get a glimpse of that person's good qualities.

I don't know if this answers your question, or if I'm even responding to the right question when I say that many a mother has told many a child that the reason a father is so mean is that he learned it honest, from his parents who were mean to him.

In this regard it seems that it dilutes a little, the meanness, as generations trickle down.

Certainly learning to be mean happens in families, there is permission to be mean if your father was mean.

I used "father" in this example, but of course it could be mother, genders are always reversible on this blog. Even when it comes to wearing make-up.

I'm happy to present your post as part of the Happy New Year's Carnival of Family Life which I am hosting 12/31/07 at Mixed Metaphor.net! Hope you'll drop by the party and join in the festivities -- we have many wonderful entries this week!

We rarely take our children to the movies. Flashing images on a massive screen makes everything scarier. They get sensory overload.