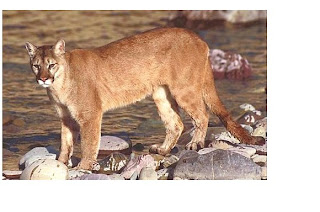 This is ridiculous. I live in Chicago. Occasionally, if we're lucky, Chicagoans will see a stray deer in the viscinity of the forest preserves. Indeed I pulled over on my way home from the airport last week to show my grandsons Bambi and a friend of hers, two doe grazing in an empty lot.

Last October, in 2007, as I was on my way to work early on a Sunday morning, a coyote zipped past me on the bike path near the Chicago River. I spotted a few of them trotting down Sacramento Ave just last week. Understand, this is the third largest city in the country. Non-domestic animal sightings are a little weird. We have to drive to Lamb's Farm (a nice non-profit organization in Libertyville that you should check out with the kiddies) to see sheep.

But 2008 is apparently the Year of the Cougar. A few weeks ago police shot a wild cougar (is there such a thing as a domesticated cougar?) in front of Ravenswood Hospital, not that far from my office.

Animal rights activists were up in arms, as cougars are generally after deer and smaller mammals, not people, but this defense has yet to be tested here in town. Cougars can kill people, we think. They're armed. The protesters opine that Chicago's Finest should carry yet another heavy piece of equipment, stun guns with animal tranquilizers, something less lethal than bullets.

The cops I see in my office are overdressed as it is. They sink into my sofa. A bullet-proof vest weighs in at about 22 pounds. And guns aren't light. This is not an easy profession, law enforcement in Chicago.

The cougars follow the Chicago River. Native to the Americas, probably from the Dakotas, they have theoretically been chased from their natural habitats and are hungry. They have found the big city and can't get a seat at McDonalds or won't try.

We thought this one cougar sighting/assassination outside the hospital only a few weeks ago, a fluke. Probably someone's cat got loose. People do this. They buy exotic animals and keep them at home, squirreled away in their family rooms. The psychology behind this is flirtation with danger, a need for excitement, primarily, under the guise of a love of animals.

But then we heard that indeed, this isn't the case! The cougars are not pets. They are following the river, some say from northern climes, the Yukon, some say from the south, perhaps as far as the Andes of South America. A long way away. Not an easy trip.

Cougars, as in, plural. More than a rogue cat.

This morning CBS warned us of yet another cougar sighting at California and Lawrence Avenue, again, same neighborhood.

As a relatively cautious, environmentally green individual, I tell people that when I ride my bike to work I am safer than they are driving around in cars. And I take the river route, too, which is scenic. The only danger is an occasional dog off a leash (a $500 fine) that likes to chase bicycles, and I tend to outride them.

So I need to know, real soon. Someone tell me, please, because the weather's getting good and I'm ready to roll.

How fast is a cougar?

Midwife with a Knife said…
The bad news is that they're pretty fast. The good news is that it's only in relatively short bursts, so if you've got a head start, you can likely outrun them.

I grew up in Alaska, and although people occaisionally got mauled by bears (and generally only when they were doing something they shouldn't have been doing), more people were killed by irritable moose (especially in the fall). They really are more afraid of you than you are of them.
April 30, 2008 at 8:45 AM

therapydoc said…
Aw, thanks. I took an alternative route, city streets, but it's not fun and not as safe traffic-wise, and I wouldn't have had I not been late. Cougars are nocturnal, thank G-d, so if I can get out of this place before dark, we're good.
April 30, 2008 at 3:52 PM

Crabby McSlacker said…
I'm thinking you'd be relatively safe on a bike. Bikes are faster and look less like edible meat, I'd think. But cougars scare me too.

I recently moved from California where they do seem to nail joggers and hikers fairly frequently. I used to do more trail running and hiking alone but frankly I got too chicken when they started moving in closer.
May 1, 2008 at 6:43 AM

April said…
cougars are pretty pretty fast. here's how to not get eaten.

I had a family member in Idaho get stalked by a cougar, in a rural area. They are pretty sneaky and fearless--especially one brave enough to go into the city.
May 1, 2008 at 12:02 PM

therapydoc said…
AMAZING. See, our natural impulse, RUN, is WRONG. I copied some of his advice and am thinking of getting the book. THANKS!!!

If you do encounter a cougar:

Don’t run. This is especially important for children. Flight might trigger pursuit.

Face the cougar. Don’t turn your back on a cougar. Stand up.

Maintain eye contact with the cougar. Cougars prefer to ambush prey from behind. If the cougar knows you’ve seen it, an attack is less likely.

Adults: Pick up the kids. Given that children tend to frighten easily, adults should pick them up to prevent them from running or making sudden movements. Another alternative is to instruct kids to grab your leg and hang on. At the very least, children should crowd around an adult.

If the cougar is within 50 yards and is intensely staring and making an effort to hide or conceal itself:

Do all of the above.

Raise your hands overhead. If you’ve got a jacket or a pack hold it up so you look even bigger and bulkier.

Attempt to move to safety. Don’t run, but if there’s a safer location (a building or car) nearby, move toward it slowly while facing and watching the cougar.

Try to get on higher ground than the cougar.

If the cougar is staring intensely and trying to hide, combined with crouching and/or creeping toward you:

Do all of the above.
Throw things at the cougar if it’s close enough.

Smile. Show the cougar your teeth. To the cougar, you’re displaying weapons.

Yell, shout, and make intimidating noises. Your goal is to convince the cougar that you are not prey, and may in fact be dangerous.

Anonymous said…
Also, wear a mask (one with a human type face with eyes) on the back of your head. This is used in India to avoid tiger attacks, and may well work for cougars too, to avoid them jumping you from behind. Yes it is scary, but honestly, the danger to you from humans is much much higher. sort of like being afraid to get in the airplane, when you just drove to the airport on the freeway.
May 1, 2008 at 5:33 PM

therapydoc said…
See? It IS safer in Israel.

The worst thing I witnessed in Chi-town last week were a couple of midnight deer on Pratt & Central. I'm not that worried about you.
May 2, 2008 at 7:30 PM

Quasi said…
There was a mountain lion sighting this week in Eagle Rock, only four miles from where I live! Needless to say, I'm staying indoors.
May 4, 2008 at 7:46 PM