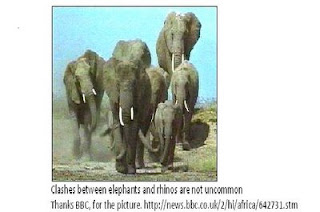 We pushed away momentarily from an informal dinner on paper, talked out. I suggested a little television while we digest a bit and flipped through the cable guide, found Wild Things. Knowing FD likes to learn anything about anything, I pushed the "Okay" button on the remote.

Rhinos. Have you seen it? The story made news in February.

Pretty interesting TV viewing, for awhile there. But I am eating, digesting. And the large animals are rubbing parasites off of their hides, lolling around in mud. I came in late, so am not sure why the animal authorities in South Africa have trans-located rhinos and elephants, but it has something to do with preservation.

They show an auction for zoos, another way to preserve them. I'm surprised that kids aren't afraid to go to zoos. After all, if we can put large mammals and pachyderms behind bars, how hard would it be to contain Little Joey?

I felt pretty sick before long and excused myself from the table, but wandered back as my stomach settled down. (Cookies help here.) Anyway, there on the tube, a young elephant is bullying a small rhino. The narrator explains that if the rhino doesn't get free, the elephant will pin him down with his knee and gouge him to death with his tusk. This is a common thing in Africa, a little like certain school yards in America.*

Interestingly, the reason for this unusual aggression, and, apparently, excessive unusual sexual behavior of the elephants, too, has to do with their age at translocation. These elephants are teenagers.

We all know that this is not a good time to move kids. Teenagers need some stability in friendship. Separating friends at this most emotional time of life can be a terrible thing, psychologically, a terrible loss. Loss makes us angry.

The scientists returned to the native territory of the aggressive young pachyderms and sought out a few elderly elephants, grandfatherly elephants, to translocate them, too. The teenagers settled down as soon as they had a little supervision. Having grandparents around stopped the aggression and the hyper-sexuality.

Now. Seems to me that this is a call to grandparents everywhere, not to go to Africa, but to get more involved with their teenage grandchildren.

You might say it's a call to the wild.

*An exaggeration, for those of you who are not living in America. It's true that it can be dangerous in certain places, like alleys in the wee hours of the morning, certainly at night, but this depends upon many things, primarily your zipcode.
Email Post
Labels: aggression in elephants hyper-sexual teenagers

Midwife with a Knife said…
So, a baby elephant was born recently in the Portland Zoo. As it turns out, his mom tried to trample him, so they pulled the baby elephant away from his mom. Apparently, the problem was this: elephants LEARN parenting. That mom had spent her whole life in a zoo, and hadn't ever been around a momma elephant when she had a baby. So, the thought of having a baby around was totally scary for her. The whole thing just didn't compute.

Jack Steiner said…
I saw that piece about the elephants bullying the rhinos. Been looking for a copy online for a couple of years now. I found it fascinating.
November 16, 2008 at 9:58 PM

therapydoc said…
Florida, right? Wait. Those are the great-grandparents. Grandparent will never retire in this economy.
November 17, 2008 at 6:27 AM

Anonymous said…
Planning for retirement in California then?

My parents appear to have successfully negotiated a tricky transition into retirement. They spend 5 months back east near old friends, and 6ish months in my "flyover" city with granddaughters. The balance is spent on adventuresome travel and visiting my sibs (one of whom also has a new baby). This appears to be satisfying everyone's needs. Hopefully FD can look ahead to a closer physical relationship to your little ones.
November 17, 2008 at 12:27 PM

therapydoc said…
Oh, Karen. Nobody even uses the word retirement anymore. Not in my world. But thanks for the encouragement.
November 17, 2008 at 1:13 PM

porcini66 said…
Hey there. Translocation is hard at ANY age, I've learned. And yes, for me at least, it equaled loss which equaled anger. For years, I traveled for my work and got to have some amazing experiences while working for several months here, several months there. That said, I always ended up back home. This latest move to the Chicago area was a huge blow and it's been more permanent that I would like...home is just plain BETTER for this baby elephant. I can identify with the elephants and their discomfort, although I hope never to pin someone down and try to gouge them....
November 17, 2008 at 1:25 PM

Beno said…
The elephant story is an old one but a good one. Nice to see it here. Elephants have remarkable emotional intelligence - they also mourn their dead.

The young males have no one to keep them in line (or show them the ropes), so they go around bullying rhinos and invading villages.
November 17, 2008 at 11:50 PM

Mark said…
Thanks for sharing an interesting show and for reminding us of the power of generations within the family structure to influence behavior of our young.
November 18, 2008 at 10:48 AM