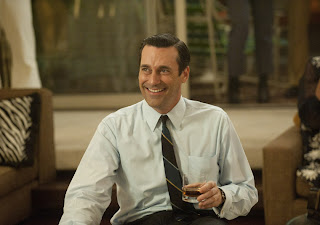 On NPR yesterday, Matthew Weiner discussed past episodes of Mad Men and his protagonist's descent to alcoholism (Jon Hamm, brilliantly plays Donald Draper).  It didn't sound like something I really wanted to watch. As a therapist, alcoholism tends to lose its glitter, even on TV.

My daughter told me to watch the show when it first caught on, but not wanting yet another must-see, I declined.  Then AMC started reruns to promote the fifth season, so I taped them and sure enough, caught the jones.  There was no catching up before Sunday's fifth season premiere, but Don doesn't appear to be an alcoholic anymore.

So here we are, two women, me and my grown daught, watching the season opener. Our spouses are both  working, although it is late evening, perfect for the Mad Men 1950's theme.  I'm absolutely mesmerized, because there's nothing more interesting than watching the ways that two people who supposedly love one another fight, and what they fight about.  Some of us find this fascinating.  (This from someone who will never see The Hunger Games, nor finish the book.)

So Don has remarried, and he seems very happy, and his new wife, Megan, who works for his advertising firm, is very sexy, and very sweet, and she wants to throw him a surprise 40th birthday party. The surprise is blown as he is about to walk in the door, and it is clear, Don isn't happy.  He doesn't like surprise parties, doesn't like to be the center of attention, and all he wants to do is go home and spend a quiet evening with Megan.

He puts up with it, plays the good sport, because he is a gentleman, or can be.  But at the end of the evening, when Megan joins him in the bedroom and throws herself at him, he makes it very clear there will be no sex.  He is exhausted, and he tells her as much in a very irritable way, as if she is the cause, but he's not discussing it, he's too tired. We're left to think that she should have asked him first.  She should have asked him if she could throw him a surprise party.

She is very hurt by this lambasting  Throwing this party wasn't easy. She invited his friends earlier in the week, late, but still, most were honored to be on the list.  And she promised at least one of them that her guests would go home and make love. Everyone should enjoy life, should be as happy as she is, married to Donald Draper.  Life is beautiful.  Enjoy it.  Some have this world view, and it can be refreshing, if French.

We learn that something else is bothering Don.  At the party Megan gives him a very public gift.  She (Jessica Pare) is the entertainment. She is his gift. She surprises everyone with burlesque, dances to a lovely French song in the original French, Zou Bisou Bisou.

Sophia Loren recorded it originally in English.  Here are a few of the lyrics, translated by Slate.

Everywhere you hear:
Kiss kiss kiss etc.
My God, how soft they are!
But tell me, do you know
What that means, between us,
What does “zou bisou” mean?
It means, I confess to you,
But yes, I love only you!

Sweet, no?  It's more lovely in French.  Her performance embarrasses her new husband, and his anger is controlled, but he punishes her in the way that a woman tends to feel it the most, by withdrawing his affection, his love, and not wasting words to discuss it.

There may have been romance for the guests that night, but none for Megan.  Her gift is unappreciated, she is rejected.  It is her culture he is rejecting.  Don, now a big advertising executive, is still a product of Puritan farmers.  But he has married a woman who has Latin blood, who doesn't see anything wrong with this, zou bisou bisou.

The journalists are saying it is about liberation, that Megan is a liberated woman, and Don isn't quite there yet.  He can philander, he can have sex, and everyone knows it.  But she?

Perhaps they are right.  I didn't see the episodes leading up to this.  But based upon her pronunciation, her lovely rendition of a French song, Megan is French!  How could it be otherwise?  Megan is French and she has married an old fashioned American man.  She should have known better.

I turn to my daughter after the show, following the resolution of their problems, better communication.  "Marriage is wonderful, no?"  Meaning, It isn't always easy.  Nobody said it would be.

Married eleven years, she smiles that tight-lipped smile that tells me-- she totally understands.

Post script:  This is not a commentary, not a negative one, on Puritanical values.  Nor is it a vote for the French.   It's really about a relationship, and how important it is to communicate values, especially, well, so as not to embarrass a partner.
at March 27, 2012

I will not watch "Hunger Games" either. The only true hunger game I know of is "Hungry Hippos".

But....you said "As a therapist, alcoholism tends to lose its glitter...."

My daughter died of alcoholism at the age of 34 and there was no way I could get anyone in my family to believe she was one. She did go to therapy.

I don't know what I'm trying to say here or even what I'm wanting to say except sometimes therapists restore "glitter" to the life of alcoholics.

I'm so sorry. So young. Nothing worse, is there?

Another Mad Men misser...I don't even know what the show IS, less what it's "about". That said, I am married to a French man and it is interesting b/c, as an American raised in the NE, you would think that I would be the puritanical one, no? Alas, such is not the case and I tend to embarrass him more often than not. This has always aggravated me, but I have learned to subdue my natural exuberance and enthusiasm when I am around him.

So much for stereotyping.

I don't think I could handle The Hunger Games. And I "tolerated" The Girl with the Dragon Tattoo, but it felt too much like I was at work, watching it...But Mad Men? I love this show. I've watched since the beginning. This season did seem to be a totally different twist. I've been enthralled with how things were when my parents were raising me. The therapist in me has noticed the "relationships" all along. How in some ways, this era seemed so simple; in others just as complicated as things are today. The constant drinking and smoking still floors me!!! I'm interested to see how Betty Draper (his ex, who is also remarried) is doing this season. She seemed oppressed from the very beginning!

Interesting. I would love to hear your take on the events of the day after the party-Meghan's passive aggressive behavior and what she was trying to accomplish.

I'll try to get to that. Thanks.