It has never been easy, being a Cub fan.

If you don't follow baseball, then you might not know that the Chicago Cubs always lose.  They always finish either last of second to last.  It is their legacy, with few exceptions.

Lucky for those of us who live in Chicago, there is another major league team, the White Sox, and they generally win.  So nobody really has to be a Cubs fan if they don't want to be. They can don black and white, as opposed to blue and red, and call themselves Sox fans. 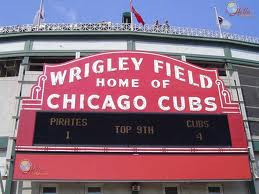 Indeed, some people don't know this, that when you move to the city, depending upon your address, you sign up to support either the Cubs or the Sox.  Some spend the rest of their lives regretting their error.

Every year, we Cub fans are offered hope, either in the form of a new owner, or a new manager, perhaps a trade.  This year's tease is Anthony Rizzo, the new first baseman who hit a home run on Saturday to win the game for the Cubs.  He won another one for us today.

And here we are, suddenly yanked around like yoyos, and all it takes is a homer, albeit the first, off the bat of an Anthony Rizzo.  All of sudden, out of nowhere. . .hope.

The joke is that some of us were just about about to coin a new disorder, CAD, thanks to a patient who made it quite clear that it made sense.

CAD, Cub Affective Disorder would be like SAD, Seasonal Affective Disorder, that winter blues diagnosis of choice for those who live in colder climes.  Except that those likely to suffer from CAD would be Cub fans in the summer.  Sadly, because Chicago is a city of the north, Chicagoans are vulnerable to both.  We can be a sorry lot.

Whether or not we'll suffer from CAD is yet to be determined, of course.  Things do change for the better.  There is certainly room, and we still have time.

One thing for sure.  Cub Affective Disorder is a seasonal thing; it has a beginning and an end.  We'll get over it, although some of us recommend acceptance, and low expectations, to soften the blow.

It is so easy to make jokes at the expense of clown fish.  Kids in therapy laugh as soon as they see them.  They ask, What are their names,  Nemo 1 and Nemo 2?

No, not terribly funny, you're right.

Another joke:  What's up with the fish?  How are they doing today?

Oh, they're just clowning around.  You know. 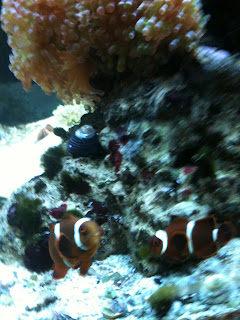 The fact is, that being an aquarist in a small office means that your fish get a lot of attention.  And when you suddenly remove them, leave an empty tank, patients get really upset.

You tell them that you found them a better home.  Your son has a reef tank with an anemone, the clown's natural lover, and his reef looked lonely with no fish.  His own jumped ship while he was at work toiling away until late into the night; his feelings, loss, guilt, sadness, sheer horror, something he can't even talk about.

So this solution worked for everyone.

Everyone, that is, except for people who had no idea this was in the works, who never had a chance to say goodbye to the clowns.  Termination, you know, is huge in therapy.  We take it very seriously.  When we go on vacation, everyone knows months ahead of time.  If we're leaving town, six months, minimum, notice.  Nobody, no patient, nor fish, nor therapist, simply doesn't show up in therapy one day.

I have a swimming pool in my building.  An outdoor, heated swimming pool.  Not that I love to swim.  At my age, swimming means something has to hurt, in my case, the elbow, a tennis injury almost ten years old, one that hadn't hurt for about a year, until now.  But I'm not complaining.  Getting out to do laps with FD early in the morning has proven to very beneficial, a high you could say.

But here's the thing.  Every morning I go through the same routine.  Do I want to do this?  Do I have to do this?  Maybe I shouldn't do this!  Why do this?  The water might be cold, and as a cold averse individual, why would I volunteer to dive into cold water? 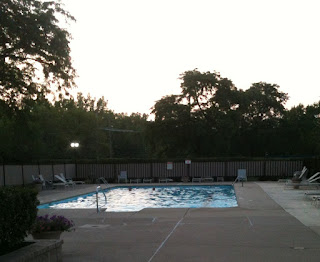 No matter, not the point.  The point is that I have to consider this, that it will feel cold sometimes.

The trade-off is that even if it does feel cold, it won't for very long, as the warm-up is only a minute, and the benefits, the physical and psychological benefits of the swim are worth it.

Thus the rational answer to the dilemma is, Swim, you bum.  Just swim.

So I approach the elevator early in the morning wearing a sweatshirt and carrying a terry-cloth cover-up and towel, a change of clothes, resigned to whatever will be.  In my head there is no feeling of depression at this moment, no matter what might have bothered me the day before.  Resigned to swimming, it is as if I can predict that the day will go well, start well, at any rate, a certain sense of accomplishment, confidence, the Neo syndrome, will take over.  The Neo syndrome is something someone keeps trying to explain to me.  Neo is a super person straight out of the movie The Matrix.  I tried to watch this movie but when Neo started to turn into an ugly creature, I had to turn it off.

All this to tell you that there is a book that New Harbinger Publications sent to me that is totally worth buying (and I rarely, if ever say this, worth buying).  For the price of a co-pay, maybe a few pennies more, you not only get a workbook that is well-written, infused with poetry and contemporary thinking (Depression is beatable!  We can do it!), but the author also values metaphor, teaches the reader how to think metaphorically.  And best of all, he's a naturalist.  He's the closest thing we have  in psychiatry to Thoreau.  He'll put you on Walden pond and you will like it, or we'll throw you out of Eden (yes, yes, we're mixing metaphors, sue me).  Get away from the grind, think out of the box, and most of all, get off your ___.

Theoretically all of cognitive behavioral therapy is this way, encourages thinking and behaving in ways that are different, better.  But frankly, it is a much easier thing to talk it, than walk it.  Your therapist can yell at you, Just take a walk every day or don't come back!  And you might never come back.

Bill Knaus (William J. Knaus), however, makes it easy.  He illustrates how to push off, quit procrastinating, take each step, one at a time, just as we do in therapy, week after week, in that fight against a most difficult, but treatable disorder, depression.  Not surprisingly, one of the first directives in the Cognitive Behavioral Workbook for Depression is exactly the one nobody likes hearing, "JUST DO IT."

So yeah, I'll be sad, after Labor Day, when they close the pool.

OMG! The therapist's fish! I hated my therapist's fish. That fish never moved. My therapist even got up and fed the fish to prove it moved. The fish didn't move at all. I spent lots of session time and money talking about how much I hated that fish. I hated looking at the fish. Complained to her about having to look at that fish. Next session she moved the fish out of my view. The best thing she ever did for me. After that I opened up and we did our best work. Finally figured out why I hated the fish so much. I have a disability that cause great pain and immobility. My biggest fear was I would become that fish unable to move.

How cool that you figured that out!
You're right on another level, however. If a therapist has an aquarium, it should be one that makes people feel good. It's not that hard, you just have to keep it clean. I'm even thinking aquariums in the office are curative for some people, especially kids who calm down right away when they see my fish swimming calmly in their little sea. Sort of a metaphor.

Well actually having a fish in the office is a big help for the therapy also watching the fish also if they have different color is great it helps loosen your stress in the body..