The new version of Anna Karenina is out.
That means that Tolstoy's best line will be on everyone's lips:

Happy families are all alike; every unhappy family is
unhappy in its own way. 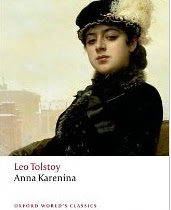 Not that each individual is happy in a happy family. But we focus so much in therapy about how to get through the holidays, we almost forget that there are happy families.

There are happy people.  Not that they couldn't use a little therapy (smiley emoticon here).  Everyone could.

In therapy we refer to these people, these families, when we talk about what not to do, or why what one person wants to do is the opposite of what people in happy families do.

There are many combinations of unhappy childhood.

For example (Obviously composite players, not particular people ever seen in therapy, at least not by this therapydoc):

Two people meet at a bar, fall in love and marry.  Jim neglected, Sally sexually abused, both can only guess at what a happy childhood might look like.  They can get it on television, but in reality, it must be fiction.  Sucked into one for whatever reason, they become very confused.

These two have therapeutic issues need both individual and couple therapy.  They work hard, but will never be buying a house in the suburbs. Their marriage has been turbulent, a difficult climb out of almost all of the isms, sexaholic-ism, foodaholism, and the usual, drug and alcoholism.

But they trek out to the suburbs for the holidays, let Jim's more functional siblings do the planning.  Both of Jim's brothers, despite the same upbringing, overcame their biggest ghost, the absence of nurturing parents, and put themselves through school.  They rose above the poverty, drink moderately. Not that they can't be obnoxious under the influence.

Jim, the black sheep, isn't close with them, but still likes to get together once a year.  He likes having a drink, eating in a good restaurant, even if he feels a little out of it.  His sibs and their wives have made all of the decisions about where to go, who is invited.  As their more functional families grow, more and more people are coming to holiday parties.

Although Jim doesn't mind it, this is a little overwhelming for Sally who is shy, who really doesn't even understand why so many people have to be there.  (You see, says the therapist, in happy families, everyone is included.)

Jim is willing to wave the white flag, to tell his family that he and Sal are taking a pass this year, but Sally keeps the argument, a marital therapy discussion, going.  No, she wants to go, but she wants to be a part of the planning committee and Jim's brothers and their wives won't let her into that circle.

Have you tried? is the question the therapist always asks.  Have you talked about this with them?

In happy families they do that, the therapist will say, they discuss things like this.  And if the answer really is that you won't be joining them this year, then it will be okay.  The holidays have to be personal, meaningful.  Why bother joining in if it only stirs up resentment?  Find another solution.  Maybe meet with each family separately, visit during the afternoon.  Get to know new-comers, even sibs in smaller, more intimate settings.

On the other hand, the communication idea is still relevant.  Until a person has at least tried to express needs, desires, issues, problems, these will continue.  The relationship, the resentment will continue. It is called maintaining a bad system, not good for anybody.

This could be the recipe for a happy family, expressing needs, desires, issues, problems.  Not that it's an easy recipe, and recipes by their very nature are as good as the ingredients.  So those missing communications ought not be sarcastic, snarky, accusatory or blaming.

Have fun.  It's a little late for Thanksgiving, but we're nowhere finished with The Season to be Jolly.

LeaRose said…
Excellent post...I wonder, once the cat's out of the bag, i.e., the dysfunctional marriage has been revealed, the kids are, at least one of them, actively individuating and the spouses are individuating---living in two places, but still dysfunctionally connected--where to go from here?
November 23, 2012 at 10:49 AM

Purple Pineapple said…
Where are these happy families you speak of?? I'm just kidding; I know of many, just not mine. :)

I've been reading your blog for a little while now, so thought it was time to pop in and tell you that I'm really enjoying it and find it very informative.

therapydoc said…
Thanks Purple. I love attention. After awhile the glitter wears off and people move on to other bloggers, as it should be. So it's great to hear from new readers. Stop by again!
November 26, 2012 at 4:22 PM

Anonymous said…
This is all very true and interesting. Never knew how much counseling could help until i visited family counseling in three rivers mi
November 27, 2012 at 3:04 PM

My Name's not Really Bridget said…
"...and recipes by their very nature are as good as the ingredients."

Wish more [meddling] people would realize this. I'm in the midst of the split up of a 25-year marriage, and all anyone can do is try to push me into "couples' counseling" with my Narcissistic husband... We've been down that path before, to no avail... probably because the ingredients are crap! We need individual therapy before I will ever trust this man again. And I don't even really want to try again. I just want to get healthy, and avoid being entangled with anyone who doesn't want to also be healthy. My kids are SO much happier since we separated. Even with the turmoil of the soon-to-be ex trying to sabotage me financially at every turn, this could end up being the jolliest of seasons because we'll have a little peace.