Imagine the scene. I've seen dozens like it. Names have changed to protect the innocent:

TherapyDoc works with a boy (10) and his dad. This is a blended family and Dad and his new wife have "Johnny" every other weekend in the suburbs.

Johnny's getting really comfortable with them on his visits. Dad and Step-mom let him run around and play. He gets more fresh air out there. Bio-Mom lives in the city in a small apartment and she's afraid to let him go out alone.

Dad and Johnny are spending valuable time on a particular Sunday morning with me, the tail end of their weekend together. Dad's the one who initially brought Johnny into treatment for, let's say, shyness and poor grades. The kid's doing just great. Grades have improved; he's more outgoing.

And the "executive committee" is working well together. To a point.

What's that? Have we talked about the Executive Committee? 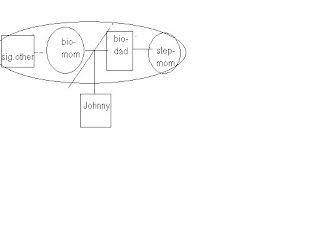 The executive committee has the big, poorly drawn, ellipse circling around it. Johnny's the only one not in there.

In the best of all possible worlds, these adults are going to periodically be alone with Johnny. If they have a basic understanding of the child and they can all agree about what the child needs and how they can best provide that, then the way they handle matters like limits and discipline will be relatively simple. A co-parenting visit regimen can accomplish that, although not handily.

If Johnny can split them, then discipline matters can be hard to negotiate. The goal is that the committee hang together. Anyone who has worked on a committee knows that simply working towards the same goal can be excruciatingly difficult, especially one in which one person might have been "chosen" over another (a step-mom over a mom, for example, by a cheating dad)

That said, when things go bad in therapy, they sometimes go very bad. A family therapist usually doesn't see EVERYONE together. That's so hard to arrange. I'll work with dyads to help them through their own particular issues, usually, with the committee's recommendations in mind. There has been a full meeting(s) and the rules have been established.

But when it's just one parent and one child, the parent might find it irresistible to "dis" another Executive Committee member on occasion, often in front of the child, even knowing that's unacceptable.

We've discussed it before, it's one of the rules, and everyone understand how "dissing" another committee member stresses a child. Nevertheless, when there's been conflict vis-a-vis individual/couple needs, a snag somewhere in communication, and the committee hasn't been working quite as well as it should, the complaints will fly. Disagreements aren't simply resolved.

As Roseanne Rosannadanna (o"s) would have said, When it's a blended family, there's always something.

When that's not possible and things fall apart, one of the executives is likely to say something negative. The bashing can be done overtly or in a very gentle fashion, subtle and quiet, almost a whisper. Then I know the basher feels a bit guilty.

What's a therapist to do?

IF THE PERSON WHO IS BASHING FEELS A LITTLE GUILTY,THEN THE FOLLOWING INTERVENTION MIGHT WORK.

IF, HOWEVER, THE PARENT WHO HAS BASHED THE ABSENT PARENT HAS AN AXIS I OR AXIS II DISORDER THEN DON'T DO THIS (you really do need to know your DSM-IV to do well with some of my interventions, especially if you intend to be a therapy doc) .

BUT . . .IF THE BASHER HAS A HEALTHY PERSONALITY AND CAN TAKE A LITTLE CRITICISM AND DOESN'T MIND BEING POKED AT WITH GOOD HUMOR, THEN GO FOR IT (and be ready to do some damage control).

This is a middle-stage treatment intervention, meaning you have been working with the family awhile, agree on treatment goals and objectives, and have good relationships with everyone. (don't get too complacent about the relationship part, it can change).

TherapyDoc (addressing the complaint Dad has mentioned about Bio-Mom)

None of us are perfect parents. We all can improve somehow. But sure, Dad, I'll call Johnny's mom, hear her side of it.

Now. Johnny. (I look at the kid) As long as we're rating parents, how's dad doing anyway? Anything you're not getting out of him? He's right here. You can tell him. I'll protect you. (smile, glance at Dad) For example, is he spending enough time with you when you're at his house? It's great that you can go out to play. But do you talk? Is he keeping an eye on you? And what about that new step-mom of yours? How's that going. Do the two of 'em ever seem to gang up on you? Ever want to just punch them?

His sheepish look will give it all away. He'll look at Dad for permission to talk. Dad will give him the green light. He knows he has to. He knows the drill.

Therapy works, doesn't it, when everyone's honest about issues and feelings*? That's when you get the real work done.

But you as a therapist had better have that relationship before you potentially embarrass or put anyone on the defensive. Unless, that is, you don't care if you never see the family again.

As one of my mentors once told me,

Remember. Whatever you do. You want them to come back.

Usually you do, usually.

*Again. This caveat, that you have to have the relationship with the parent and the parent can't be too mentally vulnerable is crucial. You'd best not upset people in general as a therapydoc. That's not what we do.

If you do upset a parent in this example you might be endangering the child, forget about your relationship.

As long as we're talking about damage control. It's sometimes inevitable. If you do think you have crossed a line and upset a parent, or any other patient for that matter, take the patient aside immediately. Stop the session to talk alone as soon as you get bad vibes or you'll be there all day. You will have had a BAD day.

Is the intervention worth it if there seems to be such a risk?

It can't be a risk. You have to KNOW. If you know your patient, and know that he or she will not be insulted and will be able to go with the flow. When you're sure, when it's not a risk, or when your family really does trust you and is grateful to you so far for having patched them together up until now, then YES, this is a very powerful intervention. It makes the parent think twice before dissing another executive committee member again, and it does get at some of those underlying issues the child has been afraid to bring up before.

As a family therapist, however, you're not into taking risks. Any cool, strategic intervention that a master has used in a book or demonstrated on a video only worked because that doc KNEW that it would.

The first rule of therapy? Be therapeutic.

socialworker/frustrated mom said…
Family therapy is always the hardest, very difficult challenge to the therapist in your example. Either way the therapist in his or her job should just try and keep little johnny away from being in the middle as much as possible.
March 18, 2007 at 10:14 PM

The other component, I believe, is time. Everyone needs time to adjust to the divorce, remarriage, step kids, step parents, excutive committee routine. And, I'd add, practice. Practice on learning how to get it right.
March 19, 2007 at 5:29 AM

therapydoc said…
Thanks SWFM and Author. It does for sure take time, strategy, and practice.

BlondeSwtP said…
We have humor in our blended household :) It helps the tension. I have to agree on the time and practice ...

We're on week 3 of my husband's step kids visit, now they are settling in as dad is being consisent with a little help from me ... then by the end of the week, we probably won't have them till summer & the chaos seems to start all over again. Forunately, the transistion time is getting less and less :)
March 19, 2007 at 11:29 AM

therapydoc said…
Dear Blonde, I'm sure it feels insane sometimes. Do the kids comment on it, too, how weird it is? Do they talk about what they want and expect? It's a crazy time when kids visit (assuming they're launched, even partially) even when the family's not blended. What to say, what not to say. It all feels so important and it is, it makes all the difference.
March 19, 2007 at 11:44 AM

Anonymous said…
I have been on the computer most of the day. Mostly games and trying to get thru emails non of which are from family or friends. In fact, I found this in an email.

Blended families caught my attention. I wonder if my situation is considered a blended family. Mom/Dad split, divorce final 2 yrs later. Both remarry. Both have new child/children. There are four whole sibs, 2 half sibs/Dad's and 1 half sib/Mom. I am 8,10,11,14,15,and 16 years older than my sibs. My brother and two sisters were adopted by my step-father after I left home. I was 20. There is no Executive Committee. I should state that I am now 57. Miserable, holidays are so awful. Just a litte worse then regular days tho.

My mother has nothing but horrible things to say about Dad. And Dad says nothing about her. Actually seems to have no animosity toward her. Except where money is concerned. Money was the reason he agreed to the adoption. Pay up back child support or go to jail. Any memories I have, which are few, are always completely different then mom's. Dad is not a talker, he doesn't remember things very well any way.

My brother and sisters have nothing to do with Dad nor our half sibs. And yet they are all my family. I am told to separate the families. I have tried so very hard. I did not speak to dad for ten years. Finally I could not continue that and started sending cards with pics etc. And finally called him two christmases ago. The next February my half brother was killed in a very bad car accident. I saw my dad, step-mother and sister for the first time in ten yrs at his funeral. He was 39.

None of my "other" family even acknowledged his death. Supported my loss... nothing. Like they did not even know he existed. They knew him. He was their brother too, biologically. You can not change their DNA like their name. It wasn't like they never knew him a brother. It just hurts so much not to be able to talk with them about him. Nothing, no memories, just nothing.

You would think at my age all this would be ancient history. It isn't. I hope any one divorced or planning a divorce realizes that your children can suffer severly if it is not handled in a loving and caring manner. Just because the two parents no longer love or care for each other as partners, does not mean the children have the same feelings. And they need repeatly told it was not their fault. And keep your bad feelings about the other partner to yourself.