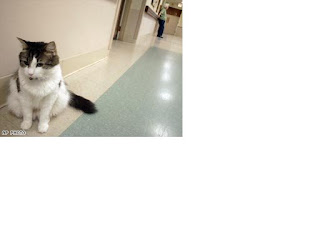 I've been a little out of touch, as I've said.

So when a patient told me today that the biggest news story this past week (okay, these past two weeks) is about a cat named Oscar who can sense when nursing home residents are about to die, I perked up.

I've always thought that cats were intuitive, but basically selfish, and that dogs were there to serve. Now, apparently, scientists think that like both cats and dogs can be extremely empathetic.

Unwilling to go with second hand information, I Googled Oscar the cat. CNN informs us that Oscar lives in the Steere House Nursing and Rehabilitation Center in Providence Rhode Island. He knows the residents and sneaks in and curls up next to them in their final hours.

Apparently he's been right in 25 cases and staff now calls family members when Oscar gets comfortable. That usually means the resident he's chosen to snuggle with has under 4 hours of life as we know it left.

CNN quotes Dr. David Dosa who wrote up the phenomenon in the New England Journal of Medicine as saying that family members are happy that the cat is there to comfort their loved ones.

Oscar surprisingly doesn't especially take to people. He makes his own rounds in the center, just like doctors. According to Dosa, he sniffs and observes patients, then sits beside people who "wind up dying in a few hours." Sounds suspicious to me.

But there's more, and nothing malevolent about it. "Most families are grateful for the advance warning, although one wanted Oscar out of the room while a family member died. When Oscar is put outside, he paces and meows his displeasure."

My take is about as unscientific as a take can be, and for sure the animal rights people will take issue. But some people will agree with me. Religious people.

My take is that the very purpose of some creatures, if not all of them, is to make humankind happy. They're here on earth for our benefit.

Sure we have to pay big time for shots and licenses, and they're a huge time investment. (Well maybe not cats as much). And they order us around, make us walk them when we're tired, take over our favorite chairs.

But we therapy docs have been recommending pets forever. We know they're psychologically good for people. They're comforting. We prescribe pets for psychological comfort.

CNN also links to another news story about 840 cats who were saved from becoming dinner. Would that have made them comfort food? Just wondering.

I feel like my cats are a real blessing (can I use that word even if I'm not religious?). They are happy to see me when I get home, and that's really nice. They also know when I'm having a tough time and cuddle up to me. They're also not nearly as labor intensive as dogs. It's funny and kind of cool how pets can turn a bad day into a good day.

therapydoc said…
Yeah, I picked up a cat when I was a kid and my mother let me keep him. But he had a mind of his own, came and went as he pleased. But he was affectionate.

When the family he belonged to put a note on his collar so that we'd call (We'd like to meet the people who feed our cat; he only stops by on occasion, these days, please call us so we can compare notes)I realized he really did like us.

Emy L. Nosti said…
Saw this on Ambivablog too...she also made a religious interpretation. Cat-holics, the bunch of you. (Sorry, my wordplay has been getting out of hand recently. Might be time for an intervention.)

Five minutes after reading your post I came across the following after looking up some info on a town I visited: "The inhabitants of Vicenza are pejoratively known to other Italians as magnagati 'cat eaters'. Purportedly, Vicentinos turned to cats for sustenance during times of famine." Huh, odd. Well anyway, welcome back.
August 1, 2007 at 4:11 AM

Anonymous said…
I have a little pup who does pet therapy at local nursing homes here in Boston. For the folks who love dogs, you can see what an amazing difference it makes in their day.
August 3, 2007 at 10:13 AM

Anonymous said…
Yeah, comfort food that only goes down the esophagus when it darn well feels like it! LOL
August 3, 2007 at 2:36 PM