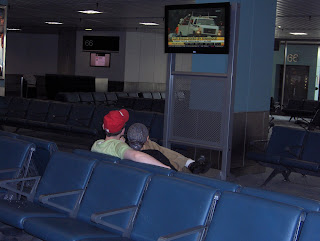 They look like they can take care of themselves.

Number three son Duv, youngest daughter-in-law Cham, FD and I took off for a simcha (happy event). We still think of weddings as happy events.

Although Cham’s been part of the family for a long time, she and Duv are only married a couple of years. She’s slowly, perhaps quickly learning the family culture.

Although I pride myself in running on time, when we were young FD and I literally ran down the tarmac to catch planes. In the late seventies a flight crew stopped a taxi-ing plane to Eilat (or maybe it was Sha'arm El Sheich) and rolled down the stairs so we could climb aboard.

I have to admit, it was pretty cool. And did I mention? We're nobodies. We're not dignitaries, not Clintons. Life was simpler back then. Oh, you're late? Not to worry, come on in.

The airlines don’t do that anymore and Cham and Duv are nervous types. She's from a family that makes the Girl Scouts look lame. It's the Girl Scouts,with that motto, Be Prepared, right? I think that three hours early for a flight's about average for Cham's fam.

Then there's FD who wrings every minute of its usefulness. Every second counts and he's in a hands-on profession. So being early can feel like a real waste of time. I've tried the cognitive therapy stuff on him (and me), but at the beginning, middle, or end of the day, someone always has to show him something. Or he has to listen to something, or talk to someone about someone about something.

What DID we do without cell phones?

Anyway, to be fair, FD really does his best to make sure that we aren't chasing down planes on tarmacs anymore.

So we took this vacation a couple of weeks ago and had it set up so that we'd meet the kids at the airport. We were relatively on time, made it by 6:20 a.m. and if it weren't for the budgers (those people who just HAVE to stick their suitcase on the scale ahead of yours, even though your boarding passes are ready and theirs aren't) we'd even have been early for our flight.

We all sighed the collective sigh of relief in our seats at the gate. On time for an international flight means your flight will take off 2 hours after you've checked in, assuming it really is on time.

Cham: Hey, Ma. Did you happen to bring anything to eat?

Duv: It's okay, don't worry about it.

I forgot. A failure as a mother. I forgot food. My mother would never have forgotten food.

Now if you recall, in one of my posts about visiting the kids in L.A. I packed such mouth-watering sandwiches that the lady in security almost confiscated them. She said, "You know, if you had made liver and onions I really would have confiscated them."

Who knew you could joke around with security? Ah, our care-free post 9-11 days, always funny.

For this trip I had it in my head that we'd eat on the plane since EL AL, the Israel trans-Atlantic airline, serves fairly edible kosher meals. They're standard; you don't have to order kosher.

But we were on American connecting to EL AL in Newark and American is American, meaning no meals no how.

I tried the, "Get yourself a latte kids, and a yogurt/apple," but that didn't work. I think they really wanted a sandwich.

No problem, they tell me. Worst case scenario they'll graze at Newark between flights.

So of course it's no big deal, and they really didn't care. They were hungry because they had just moved into their apartment and hadn't stocked the fridge, knowing we were leaving for vacation in a day or two.

They hadn't actually depended upon me bringing breakfast, being supremely independent in so many ways.

And they know they can raid my fridge any time.

But I have to admit. It was nice there for a moment, being back in the mom role, even if so characteristically disappointing for them at "crunch" time.

Anonymous said…
I recently found your blog and spend the better half of an evening reading past posts---I love your voice!

Anonymous said…
I can relate to Cham and Dov in this post. My husband and I are the opposite- he gets everywhere three hours ahead, and I say, "what's the rush?" He gets antsy with my family when he's with them (we missed a train because my father was in charge of dropping us off) and I get irked around his because they plan every trip, week, event, etc. down to the last minute. We're getting used to those differences though, but man, it can get very tense around the house when we're leaving for the airport!
August 9, 2007 at 8:25 PM

JHS said…
Thanks for participating in this week's Carnival of Family Life. It will be posted at midnight (PDT) at http://www.jhsiess.com!
August 12, 2007 at 11:24 PM