Holding On and Letting Go 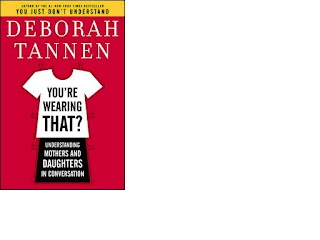 You're Wearing That is the title of a new book by Deborah Tannen.

Most of us instinctively identify You're wearing that as a mother's communique to a daughter, and that's what the book is all about, mothers and daughter and how they talk to one another.

Earn the right? There's a right to emotionally abuse a family member?

A little harsh, let's dial that down.

Of course if you don't correct your children then they might grow up feeling the world owes them a living and that they're always right, or conversely, that no one cares about them and they're nobodies. But there is a right and a wrong way to advise people, and probably Dr. Tannen discusses all of this in her book.

(Why is it I didn't get an advance copy of THAT one, by the way?)

Recently a patient told me that the state of being angry is now considered emotionally abusive, a real kick to therapies that encourage you to beat your pillows. I still like the beat your pillow concept. Who does it hurt, after all?

But for sure if you're in therapy or have ever been in therapy and the topic of anger has come up then you know that the expression of anger can be extremely abusive, even in low tones. It's exactly what we tell people in anger management.

You have potential to emotionally damage by being angry-- either at your spouse or at a child-- at anyone, if the way you express your anger as volatile and unpredictable, or if it's cruel, biting, mean.

I've told you this on my Because of You post that discusses Kelly Clarkson's song. She bemoans the domestic violence she experienced by watching her parents fight. I tell you that her anxiety, her fear is a response to trauma.

I titled this post Holding On and Letting Go because so much of what happens between parents and children is about control. We have such a need to hold on, take care of, protect our children, that letting them fly can be supremely difficult.

Sending them to kindergarten can be hard, how can we do weddings? The stress of letting go (and the energy it takes to hold on, double entendre intended) is a variable that surely drives the way moms and daughters talk to one another.

So when it comes to communication, walking on eggshells, even if it is uncomfortable and doesn't feel intimate is a good thing. The intimacy will come if we're careful about how we talk to one another. It's okay to have to watch what we say-- to think and rethink everything, to couch communication in the most sensitive, caring fashion.

I don't mean to minimize this subject in any way, trust me. I understand that if your child's shooting up that you'd better do something and it might be best to be strict, calculatedly rejecting, even mean. We can talk about that another time.

Meanwhile, here's a quick excerpt of the book, excerpted from the NPR website. Congratulations Ms. Stamberg and National Public Radio and thanks Dr. Tannen.

A woman in her sixties expressed this: “I always assumed that once my daughter became an adult, the problems would be over,” she said. “We’d be friends; we’d just enjoy each other. But you find yourself getting older, things start to hurt, and on top of that, there are all these complications with your daughter. It’s a big disappointment.”

Especially disappointing—and puzzling—is that hurt feelings and even arguments can be sparked by the smallest, seemingly insignificant remarks. Here’s an example that comes from a student in one of my classes named Kathryn Ann Harrison.

“Are you going to quarter those tomatoes?” Kathryn heard her mother’s voice as she was preparing a salad. Kathryn stiffened, and her pulse quickened. “Well, I was,” she answered. Her mother responded, “Oh, okay,” but the tone of her voice and the look on her face prompted Kathryn to ask, “Is that wrong?”

“No, no,” her mother replied. “It’s just that personally, I would slice them.”

Kathryn’s response was terse: “Fine.” But as she cut the tomatoes—in slices—she thought, Can’t I do anything without my mother letting me know she thinks I should do it some other way?

Anonymous said…
a very interesting post - I'll have to pick up the book. You might be interested in a recent book by Courtney Martin called "Perfect Girls, Starving Daughters" which seems to discuss similar issues. It deals with the problems (specifically, but not limited to, eating disorders) faced by women in their teens and 20s who were raised by second wave feminists - women who taught them all the "right" things (not to objectify their bodies, etc.). It's a different take on this mother/daughter relationship and is an extremely insightful account of "what went wrong?", so to speak, and how parental (as well as social) messages persist and continue to define how young women interpret and perceive themselves.
August 9, 2007 at 9:43 AM

therapydoc said…
Oh, that sounds great. Many years ago we talked about a book, I think it's called The Golden Cage.

The Best Little Girl in the World (maybe that's another book) is another take on anorexia.

Tracee Sioux, Sioux Ink: Soul Purpose Publishing said…
I was just speaking to my friend about this. My tone is out of control. By out of control I mean I find it difficult to control. It IS interfering with my spousal relationship and coming out of my daughter's mouth. My tone is coming out of her mouth. Now it's a problem. I've identified the problem. But, I can't seem to let go of the tone.

It's totally from my mother. My tone was developed as a reaction to her critical and judgemental expectations of me. Found people who create the same triggers and the same childish feelings. Now, I have a tone and my daughter has a tone and we go round and round. I am starting to sound more and more like my mother. I've even been telling God, "I surrender the tone. Take the tone." The tone is just not effective in getting what I want.

But, I feel compelled to speak in the tone. Tone turrets.

I'll be talking about this at So Sioux Me next week. I can't empower my daughter, which is my intention, if we go round and round in a tone.

Tracee Sioux
So Sioux Me
Empower Your Self
Empower Your Daughter
http://www.sosiouxme.com
August 9, 2007 at 3:21 PM

therapydoc said…
Sioux, one way to change tone is to lower volume. Whispering is hard to do, but it's low impact and rather sexy. In therapy it's often, Err on the safe side, exaggerate the opposite.
August 9, 2007 at 3:38 PM

Guilty Secret said…
Reading this I was thinking not about my mother but about my best friend. I never let her just do what she wants with the tomatoes, I always tell her she needs to slice them or quarter them or whatever. I care too much about the shape of the tomatoes. I wonder if this book give any advice on what to do about that.
August 16, 2007 at 5:41 AM

therapydoc said…
GS, The obvious answer would be that you're supposed to let go here (about the shape of the tomatoes) but if your relationship thrives on the back and forth of artistic ideas, then maybe your input is what makes that flow.

Guilty Secret said…
Good point, context is very important (as always). I know she thinks I'm too hard on her, though, cos she tells me sometimes.

I loved this post and it really stuck with me. I have just linked to it in one of my own posts, actually. It does not matter whether they quarter or slice the tomatoes has become something of a mantra of mine!
August 29, 2007 at 10:05 AM

Ella said…
My (male) therapist recommended this book. Now that I've read it I realize I'll never have a really intimate level of conversation with him. Sigh. Plus I could probably be nicer to my mom.
April 17, 2009 at 7:52 PM

Jessica Whelan said…
well, 3 years later after this was posted, when im scurrying to finish scholarship applications that are due tomorrow (yay procrastination!), i happen to get side tracked by your blog. which i found i rly enjoy. so, kudos from jessica, if it means anything. haha. tho i do want to give a little imput, about the "golden cage" (mentioned in previous comments). i struggled with anorexia nervosa my sophmore year in highschool and recovered by the middle of my junior year. and simply put, I HATED THAT BOOK. it is bursting at the seams with a bunch of stereotypical crap from people who obviously know nothing of the disease. i assume it was written many years ago, still, reading it made me cringe with how it boxed all eating disorder patients into oversimplified categories that didnt even skim the surface of what went on in my mind. albeit i may have been some freakoid who is different from the majority, idk, regardless, it was poo.
but, no hate intended. i rly love this site. sorry for the rant.
January 31, 2011 at 6:17 PM