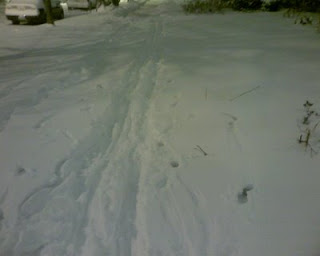 That's the ski path I plowed in front of my house and the house next door. 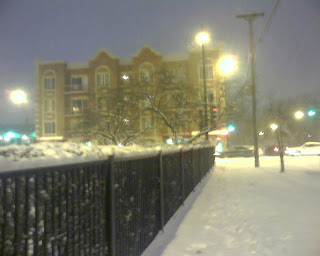 It's snowing in Chicago. 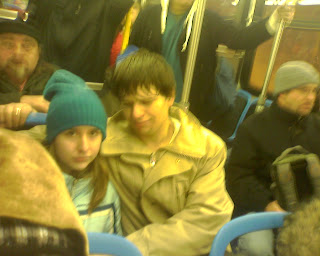 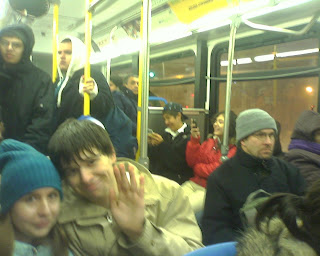 They say a picture is worth a thousand words.

I took off most of today because there's too much clutter in my life. At some point you tell yourself that your mental health deserves declutterization. My friends actually have another word that they use that we made up to describe this process of pitching things, not something I can repeat here.

And although it was great, throwing things away, I had to get to work to see my late afternoon patients. Meanwhile, the snow had been falling since eleven a.m. Driving in that stuff, parking, just the thought of snow on the windshield, makes me ill. And don't get me started about the way people drive. You can read more on that on someone else's blog.

I would have tried cross country skiing all the way here, but can't afford a fall, just can't. Sorry.

So I took the bus and am on time, but everyone else is late because of snow and traffic.

But I took the bus.

I think I've told you that I love it. Nobody likes waiting for buses, but once you're on one of these big green machines you feel instantly impenetrable. And as I'm walking to the bus I'm thinking, Hey, I could walk! But it's slippery on the sidewalks, something I learn soon after leaving the house, so why risk it.

The bus, meanwhile, is filled with happy people. Everyone is happy. Maybe it's because they're on the bus, not outside shoveling or slipping. But we're in high form here. The holidays are coming and it's so, so beautiful outside, it's not to be believed. Once I'm seated and feeling the love, I do what 90% of the world does on a bus, yank out my phone to take pictures. I think to myself, "Who will notice me taking pictures?"

I'm not aiming, just pointing my camera back, shooting random shots behind me. I see a couple of kids (above) popping up in all of them, and say to myself, "NG, no good, can't use these. What if someone recognizes them, someone they wouldn't want to recognize them. They're obviously in love."

So I raise the camera higher, and keep trying, but none of the shots are any good. And most of them have this young couple prominently, undeniably, displayed.
Then, in the last picture, I see it.

He's waving at me.

I laugh and turn around. "I'm sorry. I just thought I'd get a couple of pics for my blog, but I keep getting you guys (I show them their pictures) and I figure that I can't expose you on a blog because someone might recognize you as a couple, and for all I know someone has forbidden your relationship, or one of you has a different, jealous partner.. . and. . .and. . "

The young woman is working on getting a word in edgewise as I struggle with words, so I finally shut up to hear her say, "It's okay, it's okay! We used to be in a relationship, but we broke up, and now. . ."

And since I'm not working, I interrupt her. "But his mother might object.. ."

This time he interrupts me, but he speaks softly and I don't hear what he says and I just roll right over him since his words aren't computing, "And your mother might object and she might get upset and you'll get into trouble.. ."

Then she interrupts, "But his mother is. . "

"What was that you had said before?" I ask him.

He smiles, his eyes are laughing, believe it or not, laughing at me. "My mother's been gone for a year now, so there's really no way she'll mind, and she wouldn't mind even if she were here. She passed away over a year ago."

Foot out of mouth, moving right along as if this is the most normal conversation I've had all day, I say,

"Uh, oh. So you've lost your mother and I'm ranting about her and how mad she will be seeing a picture of the two of you on the Internet, and now I've made you sad, and you're going to cry and I'm SO, SO, SORRY!!!!"

They both laugh at me. They think this is hysterical. Others are listening, too. Then our girl informs me with not a little authority, "And there's no way he'll cry; he doesn't cry."

He confirms. "She's right. Really. I don't cry. And you can use the picture, go ahead." And he's smiling and nodding encouragingly, and I just love him.

And she says, "Right, go ahead, it's fine. And really, don't worry. You didn't upset anyone. He never cries, he's fine, he really is"

And I love her, too, because she' maybe the nicest kid I have ever met in my life. And I say, "But he might, and he has good reason to cry, even should cry once in awhile, maybe. It's surely okay if he does and even if he doesn't, of course."

And he smiles and nods. "I'm okay really. And I won't cry if you're worried about that, about making me cry."

I shake my head in amazement. "This is amazing," I say. "This whole thing."

And they seem to agree.

Then, to be sure, I ask, "You're sure, you're a hundred percent positive that it's okay for me to post these pictures of you two on my blog, and to tell this story?"

Then, a lightning flash. "Where are we, anyway?" I ask.

I walk from the bus stop back to my office thinking, What a wonderful winter we're going to have! Simply wonderful.

Cham said…
did you give them the link to your blog? great bus story - I look forward to hearing more, but really you can give me a call if you need a ride!
December 17, 2008 at 8:07 PM

prin said…
I love riding the bus! I could tell an interesting story for nearly every bus ride I've ever taken! In fact I've been searching for something to write about...thanks for the inspiration :)
December 18, 2008 at 8:24 AM

Annie said…
theradoc, What a fun day in the snow. I miss living in St.Paul. Even though it was cold somehow the days were priceless. I am glad you had a good day. Happy Holidays! Peace, Annie
December 18, 2008 at 4:32 PM

Melissa B. said…
Greetings & Salutations, you Superior Scribbler, you! Melissa B. here, The Scholastic Scribe, & the "Original" Superior Scribbler! 2 things on my mind today: I've been nominated for a pretty prestigious blog award, and would greatly appreciate your vote; so if you click on over to my place, you'll see the info. It's an annual award from EduBlog, and I'm up for Best Individual Blog. And also, don't forget to come by tomorrow for the Silly Sunday Sweepstakes. Thanks for your support!
December 20, 2008 at 12:19 PM

Anonymous said…
Thanks for the smile...

Anonymous said…
Hi TherapyDoc. It's nice to meet you. Thanks for coming by my blog. I am happy to see someone with so much knowledge blogging. Way to get the information out there!
December 22, 2008 at 12:31 PM