Petula Clark sang a song in 1965, she called it My Love.
The lyrics of the most memorable stanza:


My love is warmer than the warmest sunshine
Softer than a sigh.
My love is deeper than the deepest ocean
Wider than the sky.
My love is brighter than the brightest star that shines every night above
And there is nothing in this world
That can ever change my love

Now that's a valentine.
This is Cupid, the original matchmaker. 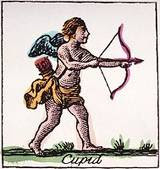 In my community, matchmakers look differently. They all wear clothes, for one thing.
But that is another story for another day. The current jury-of-what-works-in-relationships would not approve of matchmaking.
The story:
A journalist from the LA Times/Chicago Tribune, called me about week ago for an interview on Valentines Day. Why me?  Hearing about this, people in my personal sphere of influence joked about my deep, profound, enduring, long-lasting relationship with pagan holidays.

The joke is that it isn't true. Like most observant Jews, I don't celebrate Valentine's Day or even Halloween. No Trick or Treat, no cheering, Happy Valentine's Day! Sounds horrible, but nary a dime spent to say, I love you.

Which isn't so bad.

Many years ago Valentine's Day was associated with the expression of love, not the flattening of the wallet.  I learned this because a little rusty on the history of the holiday, I did what anyone would do to prepare for an interview. I Googled it. Apparently Pope Gelasius I, clearly a visionary, razed the pagan rite, Christianized the day in 496 A.D.

In his quest for dominion and land, Claudius thinks it prudent to ban new marriages, put an end to that threat to the empire.

The stroke of a pen in those days.

You may recall the PBS series, I, Claudius with Derek Jacobi.
In the dramatization, Claudius himself engages in all kinds of liaisons and conflictual loving relationships. But apparently he bans them for the common folk. So off to war we go.

The abolition of marriage doesn't sit well with the people, and a rebellious priest defies the emperor, marries off young couples at a brisk pace.  (I picture these ceremonies happening in the woods). Unfortunately, blessing unions lands Father Valentine in jail.  There, behind bars, he falls in love with the jailer's daughter, and before his execution on February 14, sends her the first Valentine.  It is a letter.  A note.  Signed:

Knowing this history freed me to spout off eloquently to the Tribune reporter, Kelsey Collister, who proceeded to write a cute piece, Have a Stress Free Valentine's Day. Kelsey whittled down our 45 minute interview to a few sentences, still got most of it right.

She asked me the reason this day seems to be so stressful, and I said that people are afraid to fail at Valentine's Day. And basically,

Life gets in the way.

Who has time for another holiday, seriously?  Did you get that Bar Mitzvah gift for your nephew?  Why not? And we're all way behind on birthdays.

Another reason for the angst is that we have lost the skill of love, expressing love, even feeling love.  We're great at sex (at least people seem to say they are) but love is a lost art. Love is sexualized, I think is what I said. Only one of the five intimacies, and yet, you would think, that's all there is.

Relationship therapists recommend saying I love you, and saying it often, but this is far from easy. We're all children really, locked into our fears of rejection, our fears of intimacy.  What happens if our words are not reciprocated?  Not good.

So we play it safe, keep it intellectual, funny, or sexual.  Don't give over that part that is most vulnerable, the part that craves attachment. Be cool.  It's not about love.

But it is, and couples know this, at least the ones I see. Love is everything, and the test of a relationship is the work, building on that attachment, adding to whatever it is you have, bonding over problem solving, working together, sharing, negotiating the in-laws, work. Children. Love is a verb that builds, takes two partners, makes them into one.

This did not come across in the interview.

What you get instead is me saying that if your partner shovels snow, massage the sore muscles. Not very deep, that advice.

But touch does matter.  We don't just massage anyone's sore muscles. Humans are sensuous, and the other way to loving, the one that isn't work, is to feed the five senses-- touch, smell, sight, sound, and taste. Good relationship therapy works toward enhancing life in this way, together, pushing away from the ordinary, the ho hum. Maybe even leaning towards chocolate. Smelling flowers.

So sure, you can give a gift or three on this holiday.

But I like Father Valentine's way so much more, and think it is what we need in our technologically glutted, electronic world. Not the generic grocery store greeting card, but a homemade valentine.  Historically these are works of art, beautiful, sensuous, cut by hand. Let's rejuvenate this art form, and better even, take the religion out of it. Any day, any time, create something for someone.

Should that be a valentine, however, consider buying the following: rice paper, watercolor,  lace. Try to make something pop out of the card, like they do in the childrens books. Write a poem, Nancy Rosin,  president of the National Valentine Collector's Assocation, has close to 10,000 of these, including the first mail-posted Valentine on record.  Her collection is a social history of love and it is more than beautiful.  Each one, homemade.

Making your own works because like a good chocolate chip cookie, it is original, has no added preservatives, feels fresh and personal, smells good.  And better than a cookie, there are the words, the sentiments.

No time to shop, get out the markers, the paper, the magazines. Collage is fairly simple process, Google that, and add old pictures, make it personal. Go to your mother's sewing box and find some pretty material, cut and paste it to your card.  Make it beautiful. Try.

And if that seems impossible, then write the right things on a plain piece of paper. Celebrate your appreciation, your need.

When I met you, the world turned colors
My thoughts, my dreams, no trace of others,
The future bright, warmth and treasure
For you I gambled, without measure.

There. That took all of 76 seconds. Feel free to steal it, don't even worry about giving me credit. Or just use the Petula Clark song. My love is warmer than the warmest sunshine. . .softer than a sigh.

Leigh said…
Sweet post doc! I think it's difficult to talk about rejection - and what happens to a person who feels rejected and how to deal with those feelings of rejection. We need to talk more about this and keep talking about it - forever.
February 13, 2011 at 6:15 PM

peppylady (Dora) said…
I found your post interesting but all holiday cost money. Actual valentine day is a work day for me and my birthday is so close to valentine.
So in year past I have a valentine shape cake.

Holly Schwendiman said…
Far too long since I popped in for a visit. :) Hope you're doing well and having a stress free Valentine's!

FamDoc said…
Valentine's Day left me traumatized when I was in first or second grade. You see, it was mandatory to buy a box of VD cards (cheap, all the same), and give one to everyone in the class, boys and (YECHHH!) girls alike, even that girl with the ugly hair and presumably cooties, which I thought was WAY too risky, lest the gesture be taken seriously and endless public humiliation would follow.

Besides, I was deeply in love with the teacher (until she got married later in the school year).

Though I now appreciate the thought behind democratizing the love-message ritual in elem. school, I've never since put any private expressions of love in writing (no paper trail, only hearsay).
February 16, 2011 at 2:03 PM

Syd said…
Nice. I like saying I love you many times a day. And massages are great. Much better than all the chocolates and flowers.
February 27, 2011 at 1:17 PM