What Jews Do on Christmas

I'm in the kitchen, stirring a hearty vegetable soup so it won't catch, singing Have Yourself a Very Merry Christmas, trying to sound like Judy Garland. It is embarrassing to say how much I love this music.

I didn't always, but the seasonal songs sound so much better now than in years past. Pa rum pum pum pum, orchestrated, mastered.

At this point in the essay the rabbi is throwing me into cherem (gutteral ch). Cherem is for Jews who do and say inappropriate things, things that are patently not Jewish, not a real place, like, say, Oklahoma.

But how can I lie? And he knows I'm just kidding.

Have Yourself a Very Merry Xmas  is from the 1944 musical  Meet Me in St Louis about a family that almost moves away from St. Louis because Daddy has a great job opportunity somewhere else. That’s the whole plot.  Judy Garland, of course, is unforgettable, the song, a heart-stopper. All this escapism while rockets fire, people die in Europe, WWII. Not so very merry.

It wasn't just that movie that took us all in. It’s a Wonderful Life, White Christmas, A Christmas Carol, -- Elf—   people gathered around their televisions during the holiday season, those innocent years before cable. There never were too many Chanucha or Kwanza flicks. We could use some, (add in any holiday you wish).

Jewish people, not being Christian, don’t celebrate Christmas as such. It is a national holiday, however, a work holiday, and we have no religious obligation to make a huge meal or to bake a fruit cake. With nothing to do, the city at our fingertips, some of us follow a tradition to play cards and order in Chinese food, rather than venture out or stick with the standbys, watching old movies in black and white.

The history behind cards and Chinese isn’t clear, but it seems a fairly old tradition, although the card playing, poker in particular, isn't that old. Chess is more traditional. Having fun would seem to be the objective, but it could also be that Jews had to be on guard, only a century ago, had to stay awake on Christmas eve. Who knew what the Cossacks might feel like doing with a belly full of rum or vodka.

Thus on Xmas eve, some observant Jews consider it wrong to engross themselves in learning the holy books, usually an activity they try to do day and/or night. Some do, in fact, play cards. 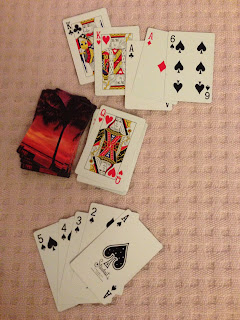 The Chinese food? Nobody knows how this tradition started or how far it dates back, but my guess is only about sixty or seventy years. (Someone correct me if I'm wrong). The kosher Chinese take-out place in my local Jewel has Xmas specials. If we didn't have such great Shabbas left-overs from Friday night, that feast we enjoy 52 Friday nights a year) it might have been a consideration.

This year seemed the right time for a new tradition. From the start the idea threatened to fizzle, badly.

I thought, How nice! It is Christmas and all of my Christian friends are going to church or home eating Christmas dinner, opening presents. We have the town to ourselves, really. And Les Mis is opening! (See Five Things You Needs to Know about the French Revolution a dynamite review).

So I called a few of my friends and suggested that they grab their spouses, and convinced my brother-in-law, who is visiting, too, that we all go to the opening of Les Mis. We'll sing the songs for weeks to comel.  I Dreamed a Dream, Master of the House, Do You Hear the People Sing -- these are songs that compete for mind space, heal any inner conflict, deserve a whistle. Shower choices, most definitely, even good for the locker room.

Only a few deigned to join in, but before they committed not to commit, my anxiety set in. Critics panned the movie, at least had plenty of negative things to say.  It's too long at two and a half hours, they kvetched. They pouted that the voices are the voices of actors, not people who can sing, not opera stars. The bloggers wrote: Who said Hugh Jackman, Anne Hathaway, or Russell Crowe could sing? They can't!

Having nagged people to come out, stealing their valuable time, time they could have spent playing poker, eating Chinese food or tooling around downtown or the better-heeled suburbs looking at lights and decorations, I thought: What if Les Mis is terrible! What if it is so terribly long, so boring!

I obsessed over this, then text messaged everyone: If you don't want to go, or you don't know the music, or you have any doubts, I won't be mad. It's okay. It's really long. I don't want you to feel you have to do this for me.

People got defensive, no question: (a) everyone seems to know the music. (b) nobody cares how long it is supposed to be, they will go or not go for other reasons, mainly that so and so is or isn't going.**

FD tries to calm me down, rational as always. It is an opera, honey. Operas are long.

Oh, we love the opera, the two of us, and this made so much sense, made the length of the film an asset, not a liability. So off we go, guilt free.

The show is mobbed. The lines are long. We buy tickets online but are still sit in the fourth row from the screen, this because we're late. For any other movie, being in the fourth row might have been a deal breaker. I might have walked out, fearful of vertigo, neck strain.

But Les Mis is fabulous, and even seeing every pore of every actor, disturbing as that can be, didn't feel that disturbing, and the dirt, the grime of France in the early 19th century, the misery! But they are supposed to be miserable, are they not? It is in the title of the Victor Hugo novel.  So they are miserable and often we feel miserable, seeing how miserable they are, but face it, none of us live in this kind of squalor so we walk out of the movie counting our blessings, clean, happy, and singing songs.

Have yourselves a very merry Christmas, dear friends. My hunch, your left-overs will be pretty good.

*a pogrom is the pillage, massive slaughtering and rape of a particular ethnic group, usually huddled in fear of clubs and bats, either  in small villages, or urban settings in Europe in the 1940's.

** my friends aren't really like this, it is a joke at their expense (sorry)

Email Post
Labels: -- Elf :es Mis A Christmas Carol Do You Hear the People Sing I Dreamed a Dream It’s a Wonderful Life Master of the House Meet Me in St. Louie White Christmas

catherine said…
i lived in NYC for 11 years... which was my introduction to 'jewish Christmas' - a wonderful way for those of us estranged from our families to celebrate the holidays. Some years, yes, I cooked a feast for other Christmas orphans, but other years I went out for Chinese food and to the movies, solo. I loved it, and now that I am back in Canada have shared the NYC approach with my friends.
December 26, 2012 at 4:54 AM

Cheryl said…
I've never heard of cards being the tradition, it was always Chinese & movie. Maybe it's a generational thing. I'm 27. There's nothing better then walking into a Chinese resturant w/an hr long wait & seeing half of your shul there. Sadly this year all my plans for the 25th got canceled on the 24th, & I was going to go to the movies by myself (The Sessions, have heard nothing but amazing things about it) but I never made it.
December 26, 2012 at 9:07 AM

therapydoc said…
Thanks Catherine, Cheryl, and Critical. It's a miracle I got to Les Mis. My hunch is that I'll have to find Parental Guidance and The Sessions on DVD or Netflix, something. I hear Pitch Perfect is fabulous, too
December 26, 2012 at 8:08 PM

Unknown said…
I'm with Cheryl, it's always been Chinese food and a movie. One of the Chinese restaurants here is even dubbed "Temple New Soul" as that's where everyone seems to congregate! I think I might have to add the cards to the tradition, as I love playing!

Unknown said…
I was thinking of looking into family counseling in Three Rivers, mi. I think it might be really helpful. What do you think?
December 28, 2012 at 5:09 PM

porcini66 said…
I loved Pitch Perfect. Although, being a celebrator of Christmas, I didn't see it on Christmas or in a theater. Just cuddled up with my least one on my bed and watched it on Netflix....heaven! :)
December 28, 2012 at 11:32 PM

Lorri said…
I loved Les Mis. I have seen the play in London, Scotland, NYC, L.A., and more than once in NYC and L.A.

Unknown said…
When you feel down, you do not have to fight back the life alone. Getting help might be the way to go to feel better. Talk to a specialist about your problems and accept the hand they give you.
Therapist Salt Lake City