That story in WSJ on Chuck Mahoney did that, triggered me, maybe it triggered some of you, too. For me it was less the outrage about nobody saving Chuck's life than it was the sadness I felt for his parents and his brother. Elizabeth Bernstein wrote:

About once a week, the elder Mr. Mahoney opens the closet and buries his head in a sweatshirt that belonged to his son, trying to detect the fading scent.

I read the story on Saturday, looked up from my newspaper, stared through an open window to the backyard and tranced back over thirty years ago, saw myself putting on my brother's clothes, picking out a jacket (way too big for me), burying my head in it. My mother found me and I turned to her, This is mine, okay?

I almost started my post (3-24-07) on Chuck Mahoney like this: If you're easily triggered, meaning if you get depressed and stay depressed for a long time and can't bring yourself out of it, YOU MIGHT NOT WANT TO READ THIS.

So Elizabeth Bernstein's article made me. . . pause. For quite awhile. A good four hours, and my brother didn't kill himself. Journalists can do that to you. This blog is journalistic in that way too, sometimes. Maybe now.

Emotionally manipulative-- intentionally. I'll let you in on a little secret. You already know it, probably. Feeling badly for most of us, soaking up a little sadness, relating to the pain of others or even feeling our very own pain isn't so bad. In fact, it's a good stretch. Almost sublime. Expands our sensory perception of reality.

In my world view if a day goes by and I haven't squirted out at least one tear then I've been out of touch with reality, the suffering around me. It's around you, too, of course.

Being unable to function when depressed means there's no capacity to think. That's why making decisions is so hard. When a person can't "think straight" then there can be an added feeling of panic. That's why you'll sometimes describe to me waking up with a horrific fear, crippling fear mixed with tears and sadness, all interwoven at the same time, severe, severe panic and pain. And you haven't even started your day! You haven't brushed your teeth yet!

Not a nice disorder, depression.

So therapydocs tell people who suffer from it to avoid triggers. Although in some types of depression (probably the severe one I just described above) triggers may have nothing whatsoever to do with the onset, meaning an episode can seemingly come from out of the air.

Bi-polar disorder can be this way, although bi-polars can be triggered too. They will usually cycle, however, and there are seasons and months that are more likely to be more severe in one direction or another. They jump around on the continuum below in every which way with no say so in the matter. Usually it's physiology is all. 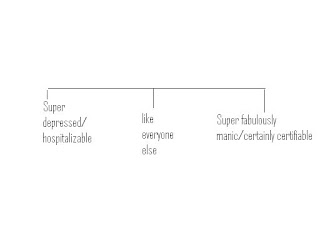 Sometimes that depression on the left can hit like a ton of bricks with no warning.

For most other types of depression, however, like adjustment disorders, the onset is a little slower, and things do get gradually more and more gray and horrible.

We tell patients recovering from depressions of all kinds to avoid stimuli that they know will make them sad, the thoughts that will stick with them, affect their thinking, send them back down again.

Here's my short list of how to avoid triggers that can either cause an episode or make it difficult to recover:

don't read the newspaper
don't watch t.v. (unless you're sure it's comedy)
don't follow the war
don't go to funerals or wakes unless you KNOW you'll be okay
don't talk to people who upset you
that might mean, don't answer the phone or the doorbell
do protect yourself from stress of all kinds
do try to live in a bubble (although you can't, really, but try)
do make your own emotionally safe, restful environment (don't accept visitors, don't do extra community work to make people happy until you're really better)

that's basically what being in the hospital is like, you know, protective

And of course, my advice is based upon empirical data vis a vis the things that trigger psychotic reactions Let's segue there because it's so interesting.

The psychotic fear, depression and paranoia of schizophrenia and schizo-affective disorder can be triggered by something called expressed emotion.

Expressed emotion is really anger/criticism expressed at anyone at all by anyone within the family or on the job. Families who have a member who suffers from schizophrenia are taught to keep the anger and the criticism, ANY anger/criticism to anyone to a minimum.

Best to lose it entirely from the family's range of emotions.

That's the best thing you can do for a mentally ill person in your family. Be really gentle and nice all of the time. That will reduce your vulnerable family member's screaming anxiety and depressive outbursts.

Now. I think we could take a leap, here. Maybe, just maybe, if anger and criticism are bad for people with severe mental disorders, then perhaps they're also bad for the rest of us?

Linda,
I've really appreciated these posts. I have a question though and maybe it reflects how blackandwhite my thinking can be, but one of the things I've understood my depression to be is my anger turned inward. How, if it's not expressed do we prevent that from happening?

Thanks for speaking out/speaking up about depression. It's one of those words that gets thrown around too lightly and is too easily dismissed without realizing that it is a life-threatening disease.

Dear NFH, I think it's the way anger is expressed that's the problem. When feelings are expressed quietly, rationally, nobody's usually upset about them. When there's sarcasm, explosion, name-calling, irritability--the message is lost in the method.

Thanks for making me clarify on this. Perfect comment (not that ANY are bad!)