Being Great and the Self in Self-esteem

A gadol ha'dor, meaning a great man in his generation and a brilliant scholar, caught in a slow elevator was asked to divulge what he considered his greatest defect. He didn't have to think very hard. "Gaivah," he said. "I have to work on this every single day, all of the time."

It is possible that I am translating it incorrectly, but I'm pretty sure that the Hebrew word indicates conceit, which means too much certainty, too much self. It means not enough acknowledgment of others or sensitivity to the depth, length and breadth of the unknown.

A truly conceited person is sure of himself, and in those moments of conscious surety there's pride, too, even a little awe, self-love. And it shows.

And then it passes, probably. For someone like the gadol ha'dor, the feeling passes with a twinge of shame, when he's conscious, aware of his feeling. Our rabbi is clear. "I have to work on this every single day, all of the time."

I'm sure you've heard the expression about someone, He's high on himself or full of himself. That seems to be a measure of self-esteem. It's dysfunctional self-esteem, of course, even if it's full or high. A person like this might think that he's great, but even if others are quick to acknowledge his greatness in something, they don't think he's great. His egocentricity might come at the expense of attention or sensitivity to others.

So being great isn't about self-esteem, it's not about the process of valuing yourself or comparing yourself to others vis-a-vis traits and skills. It's about who you are.

There is a school of self psychology. In my day they were called Kohutians, which always made me think of Martians, but I liked it and still push a modified version on patients. Kohutians would have people, usually children, draw pictures of themselves.

If they drew no arms or hands, for example, then that would indicate that they lacked the sense of power or autonomy needed to do things. Perhaps others did everything for them. So add those appendages, please. Become whole.

Ultimately the idea of self-psychology (to me) is that if you develop more of you, then there will be more of you to like. I would take it a step farther and say that yes, if you like you, too (have self-esteem), then you'll be a cheerier individual and others will like you more, as long as you don't like yourself too much.

Take a look at a continuum of self . I have no idea what the Kohutians would think of it. Feel free to Google this topic and find better continuums. 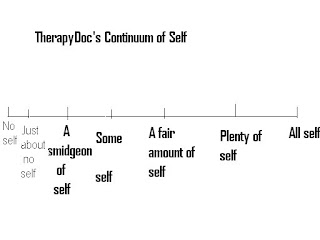 Great people, on the other hand, have long biographies about how they interact with and care for others. Their biographies, by definition, are written by other people. Great people are not into autobiography.

Great people, indeed, make interesting subjects for biography because their self-esteem sometimes waivers and their decision making isn't always perfect. They're not always sure of themselves. And we like that. We want psychological depth in our historical fiction. Chaotic family life, irrational decision-making-- that's the stuff of humanity. We want to shout at the hero, No, no, no! Don't marry her! or Don't buy that stock! Run, don't miss that plane!

So just because a person does great things, and qualifies for greatness, does not mean that he or she has an inexhaustible supply of self-esteem.

Let's look at TherapyDoc's Continuum of Self-esteem. If there is a similar one in a book somewhere, you'll have to trust me, I didn't steal it. This one comes from my personal ever-evolving tool-box of poorly drawn continuum. 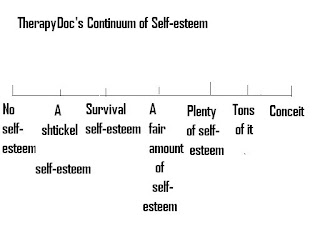 So what does it mean? Shtickel means just a little, and rhymes with pickle, for starts.

If we compare the two graphs, I think you'll see that there might very well be an association between having a fair amount or even plenty of self-esteem and having a large dollop of self.

Self-esteem surely depends upon all kinds of variables, and self might be the greatest one.

A hypothesis for your doctoral thesis could be:

You operationalize it.* Divide it into several hypotheses, for starts.

I'm thinking that having self empowers. Having self enables one to manipulate his or her environment and thereby confront, perhaps even change some of the eco-systemic variables that contribute to low-self-esteem.

Self is the ultimate force of empowerment. People who have it are better able to help themselves. And they wear hats. (just seeing if you're awake)

You'll want to quantify self-esteem, of course. Lucky for all of us there are many instruments on line that you can download. They really measure social confidence and assertiveness. When you score low on these variables it's assumed that your self-esteem needs tweaking.

It seems to me that the psych pundits (they're all pretty good) hardly ever say self. They refer to self-esteem. To have that you have to love yourself. See the good in you. Far be it from me to argue.

But that's really hard to do, build self-esteem, because it depends upon so many things. Life's full of hard knocks, and our perceptions of the words and actions of others, our emotional reactivity, our aptitudes and attitudes about lacking aptitudes, such things are colored by those hard knocks, not to mention that most undeniably confounding variable of all, genetics.

Genetics surely plays into this, but let's not go there now. Let's stick with the socio-environmental stuff we understand. It is said, however, that evolution is all about adaptive change, so perhaps we humans are not doomed, genetics or not, assuming we keep watching Oprah and reading blogs.

Anyway, people who have self-esteem probably heard messages from others growing up such as: You've got unlimited potential!

People who don't have self-esteem may have heard the opposite: You are nothing! You're a loser!

Then there's the case of no parental involvement, hearing nothing at all. It's no mystery that low self-esteem is associated with child abuse and neglect. One's experience past and present, one's hopes and dreams, blanketed by the the fear of an unpredictable, unfathomable future, all impact self-esteem.

Go change that self-esteem. Do it in Ten Days! (a workbook promise)

The task is so huge that I'm pretty sure I've hardly used the two words together in a post before. Well maybe once or twice in those confidence/social skill posts, where I tell you to be like Nike,

I'm not kidding, though. The subject of self-esteem overwhelms me. Which is why we'll do it in two posts. I'm going to let another blogger help us out, and I'll add and subtract when I revisit this one day soon (no promises).

But Beyond Blue wrote a lovely post about self-esteem that theoretically should raise hers. Doing things well, like putting out a good post on the Internet helps people feel good about themselves. Why else are we blogging, anyway?

For today let's just say that self and self-esteem are sisters. They play in the same sandbox.

And I'd like to think that the rabbi, the gadol hador, the leader of his generation was a gadol (a great man) not because he played with sand, but because he learned from the wisdom of the sages who said, many, many, many years ago,

My experience has been that those people who are constantly saying (in effect): Look at me! Look at how wonderful I am! actually have low self-esteem. They keep hoping that the adulation of others will make them feel good about themselves and they keep trying to prove they are worthy of it but never actually manage to believe it no matter what they accomplish.
November 14, 2007 at 6:58 PM

It made me think of something that happened last week.
For some bizarre reasoning, my “personality” was analyzed three times last week.
What are the odds, right?
First one was in a workshop, I had to fill out a Profile Chart.
This chart placed me in a Behavior Style No. 9… Persuasive and Persistent
Ok… I get that, I accepted that.
(Although, I am constantly told by men I am too analytical…
Wasn’t even a “blip” on the screen in that one)
Next one came from my Vice President in a development meeting:
These findings were that I thrive in stressful situations and take control (forceful).
BTW, that is the opposite of a No.9 that states on the description page:
“does not like to be assertive with others” and “does not like to be pressured”
Weird, huh?
Last one was by one of my employees, who wants me to mentor them…
Because get this… I am sensitive and personable….
Wha????
Yeah, I know, you’re thinking what does this have to do with this post?
Ah.. yeah I think I forgot…
No wait, I have it now….
Do you think it has anything to do with my level of confidence when dealing with these different individuals that cause the various perceptions?
Or do I need therapy for my multiple personalities?
Either way, Doc knows best!

And TAMI, I see you get that these pencil and paper tests aren't always reliable. One day I'll post about reliability, validity and stuff.

Anonymous said…
There is a school of self psychology. In my day they were called Kohutians, which always made me think of Martians, but I liked it and still push a modified version on patients. Kohutians would have people, usually children, draw pictures of themselves.

If they drew no arms or hands, for example, then that would indicate that they lacked the sense of power or autonomy needed to do things. Perhaps others did everything for them. So add those appendages, please. Become whole.

Rob at Kintropy said…
Thanks for your post. I appreciated the rabbi's story: if only all rabbis could be as introspective ;-)

I'm just thinking of the different hats (back to your "are you awake" nudge ;-) I wear during the day, and I think self-esteem & confidence are a continuum. I bounce around a bit toward the high end of the spectrum, but lose some in the humbling events of working and parenting and regain some again in the same spaces.
November 18, 2007 at 6:04 AM

MT said…
It sounds like you're out of step with the pendulum on praising children. That NY magazine article made a lot of sense to me. Of course, hypochondria works that way.
November 18, 2007 at 4:18 PM

therapydoc said…
IN my defense, did she not steal from one of my posts titled, No Reservations, How Not to Talk to Your Kids?

Okay, that was random, but that WAS the title of her article! The chutzpah.

She's entirely right, of course, and you are too, in that I don't read NYT Magazine (for reasons I don't want to go into here).

And that I have seen this effect in my practice, gifted kids who can't even go to school they're so embarrassed that they get B's in certain subjects and not A's.

Anonymous said…
There's a saying I like: "Only the arrogant are truly shy."

Personally, I find the confidence that comes from truth and a core self to be worlds apart from the projected identity of someone big on top of a lot of small doubts. So I question the one dimensional scale there - I'm not saying you're wrong, but I think there are more dimensions to it. Self-love (meaning love of the expanded Self, not narcicism) in my experience never creates something negative.

Related from my blog,

MT said…
Just stumbled on this: Here's Scientific American weighing in on praising kids.
November 30, 2007 at 2:41 AM