Hoo-du ya love, Substances, and The Bake Sale 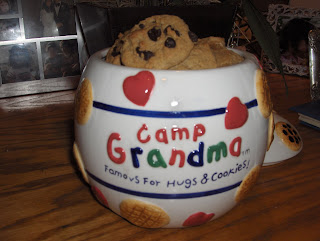 Last we talked I had finished off my chocolate chip cookie, rinsed out a Men Against Rape coffee mug, and headed upstairs to get dressed.

Oh, you don't remember any of that? Well, you're in the right place.

I might have left out the part about the coffee mug and rape, but the rest is there. Anyway, a patient looked me square in the eye the other day and said, Ya' know, Doc, that there are times that I just HAVE to bake. When I get like that nothing else quite works for me.

Now, I know that this is a very well-put-together person, and she was talking about a coping strategy that works for her. When she says, I just HAVE to bake, it's not to fill a physical void, not like the sweet tooth that drives this therapy doc to the Kitchen Aide (I've burned out two).

Anyway, baking is a coping strategy, something that can work for people when they need a lift or when nothing else makes as much sense. It just feels right, and for many of us brings back primordial memories, perhaps even collective memories if you're a Jungian.

So whether you're up and manic, anxious, rootless, simply flying around, or perhaps down and dreary, baking can help.

But if you have no patience you might not be the man (woman) for the job. For example, if it's going to take more than a half an hour, then I'm a little reluctant to get started. There's no way I'd miss The Office on a Thursday night, for example, if I thought that might mean burning a batch.

Except for now the writers are on strike.

I know a rabbi who says that once cookies have cooled down completely they're hardly worth eating anymore. He's not entirely wrong, and you all know this intuitively. Fresh from the oven is much better than fresh from the bag or the box, be it Matt's or President's Choice (the Decadent Chocolate Chip), Archway, Famous Amos, or whatever the personal fave.

I know there are amazing gourmet cookies out there. But are they kosher?

Let's reiterate. If they're cold, forget it.

This COULD be a metaphor in life.

Just one more thing about cookies, then we can move onto the finer substances of life. Baking is much more than a coping strategy in life, much more even than a life skill. Baking your own cookies is not just about making people envy your applied chemistry finesse.

Baking cookies symbolizes independence, the very opposite of substance abuse, I might add, in case you're new here.

Once you don't need your mother or spouse (or some other baking type person) to bake for you, you have attained a type of psychological independence. When Little One started baking in my house (I have to bake, Mom, there is no food in this house, I HAVE TO EAT SOMETHING!) he also started talking back. He was, wouldn't you know, so much better at this baking thing than me (I know, you're shocked).

But I felt that once he started baking that I really had no right to argue back with him about anything anymore. It was terrible when he got too cool and stopped. But we know he has the skill and can start up again at any time. It's like riding a bike. Once you can bake you never look back!

We haven't even discussed the social advantages to this coping strategy, how others will invite you over, secretly HOPING you'll bake something for them.

So on that note, let's get started with this week's Carnival of All Substances, The Bake Sale.

EDITOR'S NOTE: If you sent me posts with pictures that display naked parts of anatomy that I found offensive, you didn't get linked in this carnival. Sorry, friends. My standards are very high.

But as long as I have your attention, I really feel that everyone should see what can be carved into sand, although this has nothing to do with substances except for the fact that it's likely the artists perhaps indulge occasionally (I don't know that for a fact, of course) See sand sculpture at Death by 1000 Papercuts. (I feel I have to tell you not try that at home, the paper cut thing). Art should be, can be the ultimate sober coping strategy.

On with the Carnival of All Substances. But since my standards are getting a little high, there's little to go and see!

You can, however, read a more or less painless post about recovery. Head over to Self-HelpZone and read about internal versus external motivators to stop using.

Although frankly, I think making sand castles might be easier.

Apparently not everyone wants to give in to their chocolate chip cookie jones. Some people see them as dangerous and fattening. One such blogger sent me a link to discuss the latest rage in weight loss over the counter (over the Internet) substances.

I'm not linking over there because it seems that our blogger is also selling the drug, which is derived from plant life in South Africa.

I'm not recommending hoodia gordonii, okay? I'm just opening it up for discussion and am watching this very closely. It's a little scary to me when a drug takes away appetite. Does that mean it's likely to depress a person, too? And isn't it likely that it's addictive?

ResearchHoodiaInfo tells us that there is simply no way that South Africa can export the amount of plant life necessary to fill the appetites of Americans screaming for hoodia gordonii to lose weight. THAT means that it's very likely that the hoodia you think you're taking is NOT hoodia, but is something fake and perhaps not healthy.

In other words, you don't know what it is you're really ingesting. Wonderful. That to me is an indication (if you're ingesting mystery pill) that you have a potential substance abuse problem going on.

A good appetite is a good thing, friends. Call me conservative. Go ahead. Be a little over-weight, don't mess with your body chemistry.

For the record, the active ingredient in hoodia goronii is a steroidal glycoside, P-57. That's what suppresses the appetite. FD tells me that the history of medication for diet suppression is replete with bad ideas that ultimately cause harm to people. This one, hoodia, should not be considered a natural dietary supplement. It is, make no mistake about it, a drug, even if it comes from a plant.

You know that pot comes from a plant, too.

The late Anna Nicole Smith claimed to have lost 69# in 8 months by using TrimSpa which contained hoodia. There's a mixed endorsement for you. But I hear that she died of a broken heart. A son had died, she suffered post-partum depression, and she took every drug in the medicine cabinet. There were many enablers in that case, we know, and I feel for her family. It's tragic.

Now for more of what we're looking for. Go to Pajama Mommy who worked in her uncle's rehab. That's the kind of recovery stuff yours truly prefers.

And that's all we've got.

Straight talk? I left out all of the submissions that had nothing what-so-ever to do with substance use and abuse.

This carnival is supposed to be about recovery from substance abuse/dependency and an occasional nosh. And you know that I endorse Overeaters Anonymous 100%.

These are questions we can discuss next month, assuming I keep up this nonsense, and that's becoming a very big assumption. Let's not and say we did.

Anonymous said…
I for one will not abuse my chemistry but will keep it safe by guarding it with much downing of cookies and cups of hot tea! :D
November 11, 2007 at 7:24 PM

Anonymous said…
Hey, I used to sit down with a bag of Mint Milanos and wonder where they'd gone a half hour later.

Anonymous said…
Hey I just did this the other day... Truthfully it is the dough I love above the cookies. So I allow myself one spoonful and make the cookies before I eat more.
November 12, 2007 at 2:02 AM

therapydoc said…
They say, If you want to sell your house, bake bread before the open house. A house should smell good.
kal v'chomer. . .

For those of you who don't know what that means, it's a rule of law that you deduce from the smaller to the larger (I think, someone correct me if I'm wrong!)
November 12, 2007 at 6:06 AM

Familydoc said…
The macho male equiv. of baking is working in the wood shop, building stuff with table saws, routers, planers and other tools equally as dangerous as kitchen knives, slicers, and ovens, which I suspect is part of the thrill.

Angelissima said…
Baking is such good therapy. So is eating (therapy or coping mechanism?) I believe I go for the sweets in an attempt to get "high".
Its sad, but true. I know, eating a few hundred cookies isn't the same as picking up a drink or a drug, but the addiction principal is ultimately still there, rearing its ugly head.
November 14, 2007 at 8:22 AM

Batya said…
I can resist granola, which is extrememly fattening, because I used to make my own. I just have to remember how delicious it is, still hot from the oven, and the store-bought variety is worse than stale pop corn in comparisan.
November 18, 2007 at 10:30 PM