The President and Sportsmanship

"It's unbelievable," FD says, "this guy elbowing the President.  You don't just elbow a guard, especially if the guard is the President of the United States." 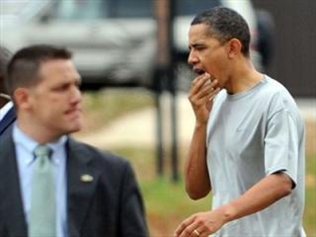 The President, playing basketball with friends and family, walks away from the fun braced for twelve stitches to the lip. If you have ever had twelve stitches in the lip, and most people cannot say that they have, all I can say is, it hurts.  The stitching, the healing, none of this feels good. You don't want to know what I did to be awarded mine, only that it was not due to the usual suspects, domestic or intimate partner abuse.  That  would leave falling, tripping, or stray rocks.

But this is not about me. Rey Decerega, director of programs for the Congressional Hispanic Caucus Institute, accidentally elbowed President Obama. Decerega tells us the game was all in good fun,


"I learned today the President is both a tough competitor and a good sport. I enjoyed playing basketball with him this morning. I'm sure he'll be back out on the court again soon."

I sure hope not. This is likely a minority opinion, but Michelle might agree, and there have to be others, too, who are upset that of all places, our Commander in Chief has been injured on a basketball court, playing a game of hoops.

I mainly worry about crunched digits.  FD plays the piano.

It is the emotion of the game responsible for our leader's split lip, the drive of adrenaline, not even his adrenaline, is the irony.  It belonged to a director of one of his programs.  The director's competitive spirit is responsible for the trouble the President will have next week talking to diplomats of other nations.

"I'm good," is probably what the President said, after the injury.  He won't plot revenge or jail the fellow.

Can we do that in this country? Can a President jail someone for a foul? No, of course not. But he might have a long memory.

The ultimate lesson of all this should be directed to the children, and the President should be the messenger, for he really shines when he talks to the kids.  (See his first day of school speech).  He might say something along these lines, but more eloquently,


It's just a game! Save a little of that aggression, that competitive attitude, for your homework.  You're going to need it, too, when you have jobs, when you ultimately move into the workforce.  The point of sports is control, precision, moving the body gracefully to reach a goal.  You shouldn't have to poke, gauge, or gash anyone to be a valuable player.

Is that so naive, telling them to work at skill and avoid brutality?

While you're talking to them, Mr. President, when you have recovered the gift of painless speech that is, tell them to pass the advice along to their parents.

I'm hoping, for all of our sakes, that he doesn't have to perform any deft orations with the Koreans...

I'll have to agree with porcini66. It seems like a nice change of pace from things like golf.

I give no quarter on the court, be it president, prime minister or the Dalai Lama. Drive baseline and suffer the consequences.

Our president likes to play basketball. I say good for him. He took his chances getting hurt and he wasn't having an affair or trying to find a guy in a restroom. I know his lip hurts and I am sorry for his pain but it cannot compare to the pain of
what is constantly being said by evil people about him and his family.

I'm not exercised by this. To me, the president's sports zealousness is a demonstration that he's a real person [which is probably one reason he does it in the public eye; it's the old "common touch"]. Taking lumps is part of that.

Don't get mad at me for saying this, but the President is a) just going thru classic mid-life male struggles to prove himself still powerful and virile (doubly intense because he would never have got anywhere near the kind of command appearance athletes he gets to play with now as the President, when he was young, because he wasn't a great athlete ever himself) and b) acting just like the white suburban rich kids in my local high school who hang longingly around the tough kids on the basketball court and get hurt when they join in the game. Perhaps he considers it a badge of honor, a proof of manhood to be hurt...

I'll bet that Michelle Obama is not upset about the injury, beyond the interference with good kisses. She's surely accepted the fact that this is what her guy does, he goes out and plays basketball.
Why is a basketball injury more distressing to you than a fall? Pres Clinton tore up his knee in fall in 1997, Justice Sonia Sotomayor broke her ankle in a fall on the way to her confirmation hearing, Secy State Hillary Clinton broke her elbow in a fall in the State Dept garage.
Walking is dangerous.

Maybe TD is projecting her fear of FD being injured playing basketball onto the President? Gosh, think I can hang my therapist shingle out now.

Nah, it's not so deep. I just remember the pain of a split lip.