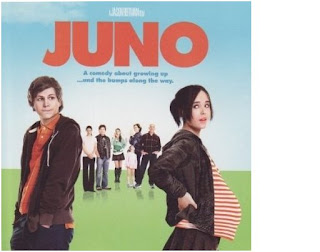 Something happens to me when I'm with teenagers. I regress. My already tenuous boundaries are undone. There's something so seductive to me about the humor, the audacity, the in-your-face challenge, the total disrespect for established mores and boundaries.

They wouldn't be there, established mores and boundaries, if they didn't stand up to tests, would they?

So it goes that a few weeks ago my friends asked me out to a movie. Sure, but it's gotta' be light, I say. No strangulations, rapes, car explosions or buildings falling on infants. (they know I haven't the stuff it takes to digest these things) Oh, and nothing that makes me think. Maybe go without me.

We settle on Juno. Juno MacGuff is 16. Her parents are divorced and her mother has a new marriage in Arizona and three replacement babies. She sends Juno a cactus every Christmas.

Juno (Ellen Page, you can watch her all day and you do) is living with her father (J.K. Simmons. You remember him from Law and Order, the psychiatrist) and step-mother (Allison Janney, who steals this movie) and their little 4-year old girl. I can't remember what they call the 4-year old but it's just perfect, right on the money for a 4 year old, which tells you how smart this movie is. It's hard to be right on the money with a 4 year old.

Juno, pregnant, has just visited the man who is going to adopt her baby. His wife is out shopping. She sees nothing wrong with visiting Mark of Mark and Vanessa, or listening to Mark's music and watching his slasher movies, even if Vanessa isn't at home. Vanessa's the serious one, but Mark is just a big kid at heart. We learn that he, like Juno, isn't ready to be a parent, either.

And Mark sees Juno as adults see budding adolescents, intelligent, honest, fresh, full of life, sexually unbounded. She reminds him that youth is limitless like the sky, whereas parenthood is clearly an earthly, work-intensive, sobering, responsible endeavor. Juno is ditching parenthood, and this is beginning to makes sense to Mark, too.

So Juno comes home late in the evening after visiting Mark, and her step-mom, Bren, the voice of reason, asks, "Juno, where have you been?" Juno tells her and Bren spits out something on the order of, "That's so inappropriate. You need to have some boundaries in your relationships." It's clear Juno hasn't a clue what she's talking about.

The sublime beauty of this developmental age.

It makes sense when you think of adolescence as a time in which the person's chip (brain) is growing exponentially, abstracting and firing faster than ever before. Add that to a sexuality that is screaming for attention and explanation, and a searching personality that, like a virus, seizes upon alternative, ever more seductive hosts. The process of establishing boundaries feels artificial and anti-growth.

Growth knows no boundaries. And yet, of course, Juno's step-mother Bren is right. Juno shouldn't be slow-dancing with the man who is going to adopt her infant and raise it along with his wife. But Juno's naive. She can't see herself, certainly not nine months pregnant, maybe not at all, as someone who arouses men, as someone who could wreck a marriage, snap it in two.

If you don't know the plot, Juno decided one day that it was time to have sex with her boyfriend. They're best friends for a year. She gets pregnant that first and only time (so not unusual with adolescents).

The kids have the following conversation soon thereafter (it's not verbatum):

Juno: I need to tell you something. I'm pregnant.

Paulee (Michael Cera, always wonderful, so sincere, delightfully adolescent): Like with a baby?

Paulee (concerned): What should we do?

Juno: Well, like, I was just thinking I'd nip it in the bud before it gets worse because they were telling us in health class about how pregnancy leads to infants.

Paulee: Yeah, that's usually what happens with our moms and our teachers.

They both understand, very well, that they're not in that place. They're not where their moms and their teachers are, emotionally. They're not ready for parenthood.

She goes to have an abortion but can't go through with it, returns home to tell her parents that she's pregnant and has decided to have the baby and give the thing away. She found Mark and Vanessa in the shopping mall Super Saver.

The scene is wonderful, a true screen classic (of course you should see this movie, if you haven't already, it's well-directed, well-produced, and the music, scrumptious). Ultimately Dad soberly admits to Juno,

"Junebug, I thought you were the kind of girl who knew when to say when."

She replies, matter-of-fact, "I don't really know what kind of girl I am."

But she knows one thing for sure, she's ill-equipped to take care of that baby, and has found Vanessa (Jennifer Garner at her loveliest), who is supremely equipped, ready, willing, and full of love, to do the job.

And to me that says it all. Juno's real intelligence is knowing that there are things she really knows so little about. She knows she's supposed to be a child, not a mommy, supposed to be playing her guitar and kicking cans, not rocking in a rocking chair. That's what her stage of life is about, growing up, having fun, establishing an identity.

She ends the conversation with Paulee that I quoted above, "I wish I hadn't had sex with you."

"Who's idea was it?" he asks. He really can't remember. They stumbled into this, and they're stumbling out. Whose idea was it? Whose responsibility?

Oh, but adolescence should be free, there shouldn't be too much responsibility. Kids should be free to grow, to learn, to study, to get to know one another, get to know themselves, their bodies, to test out their social skills, establish leadership potential, get a grip on their lives past so they can take those meaningful steps forward.

Such an enviable position, no? Why would anyone want to hurry that, choose to prematurely skip out of that license to grow, that license for silliness and abandon, introspection and exploration? Why do anything that could blunt that freedom?

What did she say? I wish I hadn't had sex with you.

THAT'S the message you want to send to your teenagers. No need to grow up so fast, have fun while you can. Play as much basketball, eat pizza, see as many movies and learn as much HTML as you can. Learn Spanish or Italian. Get a job and visit Broadway with your friends with the money you've saved.

Or perhaps sit down together and watch this gem of a film. And go ahead, talk about sex. Use the word. It'll set you free.

Radical Reminders said…
I absolutely loved this post. When i saw you were writing about Juno, i instantly became defensive because i have been replying to critiques of that movie ever since it came out. But your post was lovely, honest, and so very true. Very well said, thanks :)
March 6, 2008 at 12:03 PM

Anonymous said…
I agree with your post 100%, both the presentation of the movie, and your assessment of what adolescence should be. A friend and I attended the movie with our daughters, ages 15 and 19. It generated so much good discussion between the mother-daughter pairs. None of the Oscar-nominated movies had anything more important to say than this movie.
March 6, 2008 at 5:43 PM

Radical Reminders said…
re: blog awards - SO SO SO SO Sorry!!!! I didn't realize and i thank you for clarifying. I guess your posts always seem like actual client interactions because they are so well written and "how can you make up this stuff" ;) haha - BUT, i made the correction so hopefully the description is more inline with your blog - so sorry again for the errror. ~fg
March 7, 2008 at 6:42 AM

therapydoc said…
No, problem at all. I just hated for anyone to think I'd ever use their story. I never do that! It takes a lot of thought to make up the vignettes on this blog.
March 7, 2008 at 7:37 AM

Batya said…
You're a good salesperson. If I have the chance I will see it, but I hate going to the movies. I fall asleep or suffer back pain. I like to watch the movies at home, when I can take my breaks and crochet.
March 12, 2008 at 1:50 PM

Katy Murr said…
'They stumbled into this, and they're stumbling out. Whose idea was it?' I suppose, as a teenager, you don't necessarily realise what you're doing until after you've tried it out. It just doesn't seem quite real. Or as if there will be a bad consequence.

I do think she handled it a little too well though. Yeh it's a film, yeh we need the humour to glitter the reality, bla bla, but it was too neat. She seemed to have it all worked out. It didn't get that messy.
March 27, 2008 at 4:06 PM

shrink on the couch said…
wonderful post about a wonderful movie! and you are so right. slow down and enjoy the carefree years.
May 19, 2008 at 10:03 PM