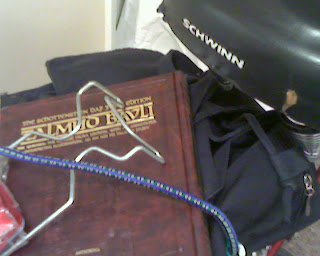 I was running late on Sunday morning, lost track of time. My distractions can get me into trouble, and when they do I have to really pedal fast.

It wasn't as if I didn't have it in the bag, I did. You have to bundle up a bit to ride to work when it's just a little above the freezing mark outside and gray, meaning it looks cold, too. So I bundled up quickly, packed my backpack onto my bicycle, slammed the front door shut and hit the road.

I felt strong, too. Amazing how it really only takes a couple of days late in the winter to get in shape for spring. Your muscles are just there, waiting for you to use them, you know. So I zipped through the hood relatively quickly, but about a half mile from the house caught a look at something on the ground up ahead, something that looked familiar.

I could see it was a book as I passed by before hitting the brakes. Decision made. It wasn't just any book, it was clearly a holy book, a book of Gemara, the tractate Taanis, about fasting.

Fasting is something we do on occasion (no food or drink, the lesser fasts are 12-14 hours, the major fasts 25). So we have all kinds of rules and stories about them and the Gemara Taanis covers it all and more. I stuffed the book under the shot-cord that safely straps my bag to my bike, and started off again.

Yet another decision. Did I have time to untie my backpack and put the book safely inside? Uh, no.

Got to work ten minutes early, flipped on the computer, changed clothes, applied a little make-up, tried to look presentable. Even though it's Sunday, I feel I have to look professional like any other day of the week. There's a name in the book so I look it up online and find a phone number, call and set up a time to return it.

Meanwhile, it's just me and Taanis. If only someone would cancel. You don't get this kind of opportunity every day. Even though a person could easily take one of his or her own books and study every day and should, it's not something everyone does. My world view is that we should learn something every day. It's one of the reasons we mark them off.

And I felt that if I didn't take at least a minute or two here, that it would be an insult to the book. The book says, Here I am.
The least a person can do is open it up.

No one canceled, so forget that fantasy. And by the time I finished with my last appointment, Taanis stared, along with a mountain of correspondence that pleaded, File me. I threw all kinds of notes, insurance claims, messages on pink paper, even coupons and a hair brush into a work drawer. I locked it hoping for time tomorrow to make the calls.

Don't spleen me. I'll get to whatever it is you think I should be working on.

Then I changed back into my biking clothes, lifted the bike off the rack, and was about to put the book into my backpack, when I stopped, made the choice.

Sit down, open the book, take a few moments. Breathe.

I scanned a page, something about washing hands with cold versus hot water while in mourning. Then the phone rang and it seemed to take forever, and knowing I still had another appointment in another office in the very late afternoon, I closed Taanis and packed it away. It was never mine, really, anyway.

I dropped off the book to it's rightful owner, left it in a plastic grocery bag hanging on the front door knob. The person who had lost it wasn't home, which was good, since it saved him the embarrassment of having to thank me, and me seeing his expression of guilt for having dropped a holy book, somehow, in the street. It's not how we treat our books, not if we can help it. So it worked out perfectly, him not being there, for both of us.

I got through the day and later in the evening decided to see if we had a copy of Taanis lying around the house. We have so many books, many with English translations.

Nothing cooking. But I found another, this one Gemara Megillah. The Megillah is the story of Purim, the holiday coming up this Friday (you'll read about it in the Carnival of All Substances very soon, it's a drinking holiday). The Gemara Megillah is chock full of information about the where's, when's and how's of this holiday, and more than a few good stories and arguments about virtually everything and anything.

So I took a look inside (daf 6b, a daf is a page) and found a discussion between the rabbis about chastising an evil person on a day that he appears to be prospering and happy. One rabbi, Reb Yitzchak, says that you shouldn't confront a bad person, but another opinion holds that you should. The rabbis agree in the end that only if you are truly righteous should you confront a bad person. If you're not totally righteous, it's best to leave him alone.

Not bad advice, right? Now here's the odd thing. Earlier in the day I had checked my email and a reader sent me a note asking for advice, not advice from me, per se, but from everyone in cyberspace. He sent emails to all of us, probably.

He needed to know if he should confront a man who was hitting on his wife, making a sexual play for her.

Should one do this? Confront the man/woman who is hitting on your spouse? The perpetrator here is said to be known for this, hitting on women, flirting too much, crossing boundaries. He overtly hits on many married women, too, not just our blogger's wife, even tells their husbands that he really likes their wives.

He's a needler, in other words, to put it mildly.

To me this is the kind of confronting that you don't want to do. You can't be sure where it's going to end. You may get to a point in the confrontation, whereby the asserting turns into aggressing and someone gets hurt.

You risk prison whenever there's violence, you know. I've talked to too many nice guys who spent time in jail for stupid fights that didn't have to happen. The whole process just isn't pleasant, that's all you need to know, really. Just avoid it.

Far easier to completely ignore a needler. Pick up a newspaper and read, show him how much you think of him by pretending he doesn't exist. We generally don't pick up a newspaper and read it while someone is trying to talk to us unless we don't have respect for that person. Or you can walk away. Passivity is the message here. You don't care about him and his shenanigans. He can't hurt you. He's a fool, unworthy of your time.

A woman, surely, should leave the room if she's being hit on and it makes her uncomfortable. She should look away, feign interest in something, someone else, make no verbal or physical response, except perhaps to shrug and sigh at his foolishness, like a mother might to a provocative child. Otherwise, pay NO attention to the provacateur.

What kind of behavior is this, hitting on someone else's wife? Whatever else it is, it's personality disordered, Axis II behavior, and as such, has potential to upset us. It's torture by design. But it's not about the woman, it's not about her husband, they're the victims.

It's all about the one with the disorder seeking negative attention, the one who is flirting with someone else's partner, threatening to steal, making people uncomfortable.

If you give him anything, give him my card (or someone else's, much better).

So to sum it up, this doc holds by Reb Yitzchak, even though it might seem gutless to some people. Reb Yitzchak is the one who said, Leave the evil one be, don't contend with him.

But sure, it depends upon the situation, certainly, the context.

And then there's always the thought that maybe you are a truly righteous person, right?

You never know. And that changes everything.

Anonymous said…
i would disagree. Tell him to stop, protect your wife and show him the door. "Simple" as that. If he is at a party, tell the host and the host will tell him to leave.
March 19, 2008 at 9:21 AM

Anonymous said…
Thank you for taking the time to get back to me w/ this one. and then expand on it in this post. I'm the blogger who asked for your input...(I only sent the question to 20 people I know..and when I saw your name in my address book I thought...I REALLY would love to hear your take on it since what you shared w/ me last Summer regarding attending a class reunion was so practical..hence the e-mail out of the blue) thanks again for you time
March 20, 2008 at 5:15 AM

therapydoc said…
I only answered, DM, because it was a generic question. If it had been about your feelings, or what to do about your wife's feelings, I wouldn't have discussed it because this is a teaching blog, not a therapy blog.

But what an interesting topic, I thought, right? And you can see that people have different opinions. And mine, tongue in cheek, was with the rabbis.
March 20, 2008 at 7:32 AM