The Third Carnival of Obsession 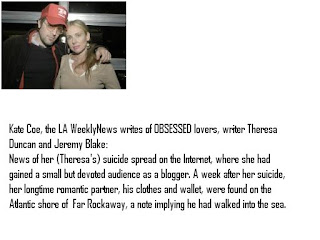 That's a pic of two lovers who committed suicide within days of each other, obsessing the blogsphere with talk of their motivation.

We have an expression that three is a chazukah, meaning it's strong, or makes for a go, so this is the third Carnival of Obsessions, meaning we'll keep this baby going for awhile.

Let's see what we have here. I didn't include any post that tries to sell you something or begs donations, over half the submissions.

People ask me why I bother if that's the case. Because there really are some good ones. Check out my personal fave for today, Petticoats and Pistols. It's about why we collect things.

Always on the look-out for coping strategies and hobbies, one blogger offers hints about stamp collecting. The idea is that if you obsess about a stamp, you won't obsess about losing your job. On the other hand, best to not obsess about stamps on the job, I suppose. Here's another one on stamps.

I felt sad reading about Weight-loss Dude's frustration, and know that many people relate. He says there are thousands of weight-loss sites on the web, which is probably true. One day we'll have to discuss it a little more seriously. Let's try for soon.

Sarah's wondering about her taste in photography, what it reflects about her. Such self-awareness is admirable, I think.

People obsess, you probably know, about traffic to their blogs, and Don Morrison feeds us advice on this topic. That post made the cut.

So did Carrie in the City. She had a dream about her ex. Talk about things that are hard to get out of your head, The ex is at the top of the list.

Mad Kane is writing shower poetry again. It's good when an obsession is clean.

Then there's the tragic, a love and double suicide, the story of Theresa Duncan and Jeremy Blake retold on Singletude. I imagine we'll see it on teev as a docudrama of sorts.

I like Zhakee's addiction to nature in the Sierra Nevada, myself, feel healthy just looking at ther pics.

CG rips into bad fads. Remember shoulder pads? There was one obsession I could live without.

Joshua's obsessed with relationship connectivity, even cried at a movie about a kid who thought he was a Martian because he didn't connect well (maybe I didn't read that carefully enough). We get so hungry for relationships that we fall for just one look, obsess about people we don't even know. It does happen. Being human is totally irrational.

JWD is obsessed with a groupie, Pamela Des Barres who wrote a book about being a groupie. Oy. But at least it's a legitimate obsession.

All right. That's it this month. Isn't there anyone out there obsessed with a television show? A movie star? Math?

Cheryl St.John said…
I'm thrilled to be your personal fave for the day! Many thanks for linking to my post.

My husband is currently in the process of building me more cabinets and shelves to display my "stuff!"